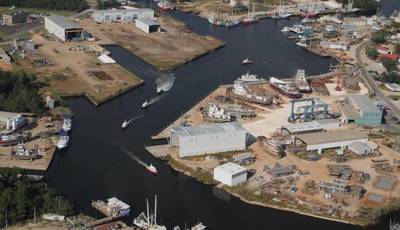 Horizon Shipbuilding announced it will reorganize amid revenues insufficient for maintaining normal operations.

Lance C. Lemcool, Horizon Shipbuilding Vice President, today issued the following statement on behalf of the Alabama-based boat builder:
“Last year, Travis R. Short, President of Horizon Shipbuilding saw an opportunity to repeat a great construction performance from 2012. Namely, an unheard of quantity of vessels in a very short period of time starting from ground zero. Hornblower (HNY Ferries) offered just this type of opportunity through its NYC Ferry project and Horizon has achieved what most believed couldn’t be done. Through the unparalleled commitment of Horizon’s boat builders, subcontractors and suppliers, all of the 2017 ferries have been delivered. However, project revenues were not sufficient for Horizon to continue normal day to day operations. The forecasted shortfalls were brought to the forefront early in the project and discussions have been ongoing since then without resolution. Horizon will now take the time to reorganize its current projects and make every effort to regain its reputation with the vendors and subcontractors that help make up the Horizon Team. Horizon appreciates the industry’s support as they meticulously navigate through the process of reestablishing itself as the shipbuilder their customers have come to rely on for the past two decades.”
Horizon, a yard that has enjoyed a good reputation for mastering the art of series-shipbuilding at its Bayou La Batre facilities, now looks to “reorganize” ongoing projects as it tries to “resume normal day to day operations.”
The announcement comes closely on the heels of what was a largely well-perceived execution of an aggressive building contract for Hornblower, as well as several other recent deliveries. And, it was just this past April that Horizon delivered the 20th towboat for Florida Marine Transporters (FMT) during their nine years of doing business together. Beyond this, the yard was also lauded for the development of its proprietary, in-house software program that was specifically designed to create efficiencies and economy-of-scale for shipbuilders and other manufacturers. Reportedly, it had been utilized during the Hornblower contract with good success.
All of that, apparently, wasn't enough to ward off today's disclosures. There were no other announcements from the boat builder, and its website, as of early this afternoon, did not reference the latest news.