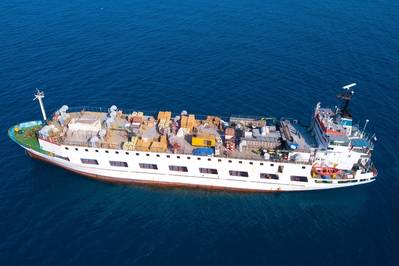 The company that operates Latin America’s largest port in the Brazilian city of Santos said on Friday it will suspend shipments of live animals.

The company detailed its decision in a letter seen by Reuters that was sent by state-run Companhia Docas do Estado de São Paulo to a congressman. A press officer at Codesp, as the state-run operator is known, said the letter was authentic. Later, the company sent a statement confirming the suspension.
The statement said that kind of operation is under evaluation by Brazilian regulators and that it would wait for their word about it before possible reconsideration of the suspension.
Santos resumed shipments of live animals in December 2017, when 27,000 cows were sent overseas through the port, a Codesp spokesman said. Before that, only a consignment of live ostriches had passed through Santos in 1996, he said.
The Codesp letter said it supports environmental and socially responsible practices and does not condone any “disrespect of animal life.”
The 27,000 calves were shipped to Turkey last year and belonged to Brazilian meatpacker Minerva SA, a spokeswoman told Reuters on Friday. The company could not immediately make additional comments on the ban.
Minerva said on Friday the activity of shipping live animals is approved by the country’s Agriculture Ministry and has been performed through several ports in the country. It said Brazil shipped more than 400,000 live animals last year.
The letter was signed by Codesp’s logistics operations director Carlos Henrique Poço and sent to Congressman Ricardo Izar. It provided no details on the timing of the suspension.