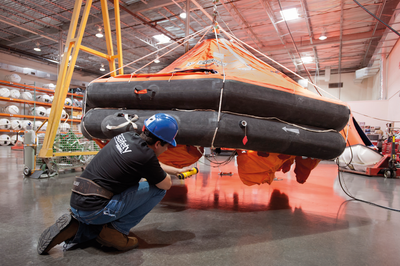 Maritime safety equipment and servicing provider VIKING Life-Saving Equipment is kicking off its presence at Sea Japan 2018 (April 11-13) with a boosted liferaft offering.
On one hand is the company’s ability to supply VIKING S30 extended service interval SOLAS liferafts; on the other is a recent Japanese Government approval for VIKING to supply liferafts to Japanese flagged vessels and carry out final liferaft assembly in Japan. This is the first such approval awarded to a non-Japanese manufacturer, and the first of a series of similar approvals for other VIKING safety products which is expected to follow.
“VIKING has taken important steps to demonstrate commitment to the Japanese market, and with the first of the Japanese government approvals in place for our liferafts, we’re able to provide solutions that more closely match the relationships shipowners already have with local suppliers,” says Bjarne Kolbo Nielsen, Vice President of the Asian region.

World leading shipping nation
With around 8,000 vessels under its flag, Japan could overtake Greece as the world’s leading shipping nation. And, with Japanese shipowners’ attention to safety ranking among the highest in the world, the potential for high-quality life-saving equipment with the latest features is correspondingly large.

Whilst VIKING’s products are certainly competitive in terms of price, quality and range, the Japanese market poses a special set of challenges for new entrants. Bjarne Kolbo Nielsen explains: “The Japanese business community is characterized by an extremely high level of internal loyalty, so it often takes years to earn sufficient trust to become part of their supply chain. This business culture also prevails in other countries, but not to the extent which we see embedded and practiced in Japan. Conversely, it does provide significant benefits in the long term and with regards to ongoing commitment, and that fits VIKING’s own core culture very well.”

Strong alliance
Five years ago, VIKING entered a strategic alliance with MOL’s subsidiary MOL Techno-Trade, which has since represented the global safety leader in the local Japanese market. Joining forces, the two companies have worked to create growth in three primary areas: deliveries to the newbuilding market; sales to shipowners; and liferaft services.

So far, VIKING has chosen not to have employees stationed in Japan.  Sales are conducted via a dedicated VIKING project team established by MOL Techno-Trade. However, Bjarne Kolbo Nielsen says: “We are evaluating the options for taking the next steps with MOL towards further demonstrating VIKING’s commitment to the Japanese market. Servicing of liferafts is carried out by Marine International Co. Ltd., which has long been the authorized service station provider in Kobe and Yokohama, and by the members of the JSMQA network which have achieved certification to provide servicing throughout Japan.”

Unique advantages
The VIKING Shipowner Agreement concept has a particularly strong business case for Japanese shipowners with its global, all-in-one servicing packages. Besides vastly simplifying the shipowners’ administration, VIKING’s agreements mitigate the risk of operational downtime. With a variety of fixed-price payment plans, the agreements ensure that shipowners know exactly what they can expect and how much it will cost.

The other key advantage is VIKING’s S30 liferafts with extended service intervals, which presents a compelling alternative to standard liferafts for commercial vessels, ferries or offshore supply ships. VIKING S30 liferafts extend the servicing intervals for each raft from annually to up to 30 months – without compromising safety readiness or compliance.
VIKING and MOL Techno-Trade at Sea Japan, Tokyo, 11-13 April 2018.