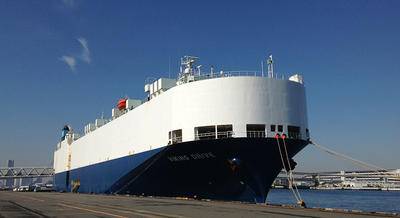 Third ocean shipping executive pleads guilty to price fixing on ocean shipping services for cars and trucks
An employee of Japan-based Nippon Yusen Kabushiki Kaisha (NYK) pleaded guilty today and was sentenced to 15 months in a U.S. prison for his involvement in a conspiracy to fix prices, allocate customers and rig bids of international ocean shipping services for roll-on, roll-off cargo, such as cars and trucks, to and from the United States and elsewhere, the U.S. Department of Justice announced.
According to the one-count felony charge filed in U.S. District Court for the District of Maryland in Baltimore on Jan. 16, 2015, Susumu Tanaka, who was a manager, deputy general manager and general manager in NYK’s car carrier division, conspired to allocate customers and routes, rig bids and fix prices for the sale of international ocean shipments of roll-on, roll-off cargo to and from the United States and elsewhere, including the Port of Baltimore. Tanaka participated in the conspiracy from at least as early as April 2004 until at least September 2012.
“Today’s sentence is another step toward bringing to justice the perpetrators of this long-running cartel and restoring competition to the ocean shipping industry,” said Bill Baer, Assistant Attorney General for the Antitrust Division. “But this investigation is far from over. We are continuing our efforts to hold accountable the companies and executives who seek to maximize profits through illegal, anticompetitive means.”
Pursuant to the plea agreement, which the court accepted today, Tanaka was sentenced to serve a 15-month prison term and pay a $20,000 criminal fine for his participation in the conspiracy. In addition, Tanaka has agreed to assist the department in its ongoing investigation into the ocean shipping industry.
Tanaka was charged with a violation of the Sherman Act, which carries a maximum sentence of 10 years in prison and a $1 million criminal fine for an individual. The maximum fine may be increased to twice the gain derived from the crime or twice the loss suffered by the victims of the crime, if either of those amounts is greater than the statutory maximum fine.
The sentence is the third against an individual in the division’s ocean shipping investigation, and the first against an individual from NYK. Three corporations have agreed to plead guilty and to pay criminal fines totaling more than $136 million, including NYK, which has agreed to pay a criminal fine of $59.4 million, pending court approval.
This plea agreement is the result of an ongoing federal antitrust investigation into price fixing, bid rigging and other anticompetitive conduct in the international roll-on, roll-off ocean shipping industry, which is being conducted by the Antitrust Division’s Washington Criminal I Section and the FBI’s Baltimore Field Office, along with assistance from the U.S. Customs and Border Protection Office of Internal Affairs, Washington Field Office/Special Investigations Unit.