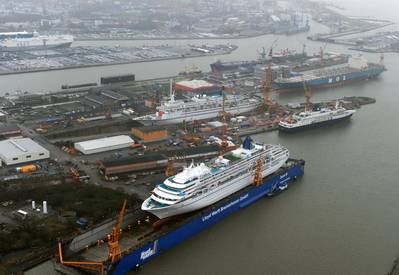 Genting Hong Kong has agreed to acquire the Lloyd Werft shipyard in Bremerhaven, Germany, in a deal that will see the company invest €17.5 million for a 50 percent ownership of the land and 70 percent of the new build business. The acquisition remains subject to final purchase conditions.
Genting, a corporation primarily involved in the cruise, hospitality, leisure and entertainment businesses, is the owner Star Cruises and a major shareholder in Norwegian Cruise Line. Earlier this year, the company spent $550 million to acquire Crystal Cruises from Nippon Yusen Kabushiki Kaisha.

Under its new ownership, Lloyd Werft will build the next generation of cruise vessels for Crystal Cruises. However, a considerable investment program is first needed on yard premises in order to be able to build and facilitate the new ships, according to the shipyard. The 260,000-square-meter Lloyd Werft yard currently has six docks and a 1,600 meter pier.

Crystal Cruises placed an order with Lloyd Werft in July for the construction of three new cruise ships, the first of which is expected to be delivered in late 2018
The shipyard has experience building cruise ships, having built vessels Pride of America, Norwegian Sky and Norwegian Sun for Norwegian Cruise Line. Lloyd Werft also completed a conversion project for Cunard Line’s Queen Elizabeth 2.
Lloyd Werft board member Carsten J Haake said, “. . . with Genting as a shareholder and with its affiliate Crystal as our designated client for building cruise ships and river cruise vessels, the future of our shipyard looks very positive and promising.”
The acquisition deal will see Dieter Petram remain as a shareholder in Lloyd Werft, though Ehlerding Beteiligung GmbH and BLG LOGISTICS GROUP AG & Co. KG will no longer have a stake in the yard.