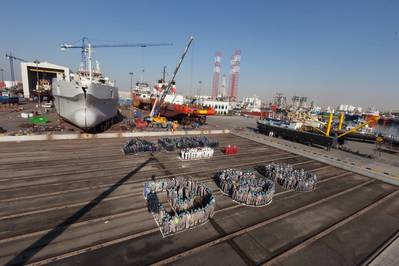 Damen Shipyards Sharjah (DSS) was officially opened in January 2014. Now, two years later, the yard celebrates its anniversary with a total of 13 vessels being dry-docked simultaneously. The vessels include pilot boats, landing craft, OSVs, as well as a cable-laying vessel. DSS has had success since its opening in both the newbuild and conversion markets, as well as the repair sector. In 2015 DSS we delivered eight newbuilds, carried out two complex conversions and dry-docked 165 vessels from all the major operators in the region.

Damen Shipyards Sharjah is located in the Sharjah Hamriyah Free Zone (UAE). With a 284,000 m² site, 1,200m of quay wall (with a draught between 5m and 9m) and equipped with a 5,200 tonne ship lift (120m x 26.5m platform), 8 dry berths, a fully enclosed blasting and painting facility, 4,500 m² of new-build construction sheds and 7,500 m² of workshops for the various trades active on the site, DSS is ideally positioned for easy access to all seven Emirates as well as providing connections to neighbouring Gulf States closer to the Straits of Hormuz.

DSS is a joint venture between Damen Shipyards Group and Albwardy Marine Engineering, bringing Damen expertise and capabilities to customers in the Middle East and beyond. The yard has the facilities to repair and construct all type of vessels, and has recently delivered tugs, workboats, support vessels, dredgers, landing craft, floating docks, barges and pontoons.