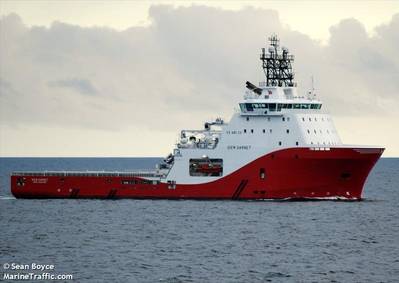 Siem Offshore said that the vessels would be sold to an independent third party, for further trading outside the offshore shipping industry.

"Siem Garnet” was delivered to the Buyer today and “Siem Diamond” is scheduled for delivery during next week," Siem Offshore said.

Siem Offshore said its objective was to reduce debt, adding that the sale of the AHTS due was done "on market terms and at book values," without sharing the exact value.

"Surplus cash after debt repayment on the two vessels sold will be used for additional debt repayment on the 8 remaining AHTS vessels in accordance with the restructuring plan agreed with our secured lenders last month. The debt in SAP will be reduced to USD104.6 million," Siem Offshore said.

The Siem Garnet and the Siem Diamond are both VS 491 CD design AHTS, built in 2010. They're designed for towing and anchor handling, deep water inspection, and construction work.

In other Siem Offshore-related news, the company Thursday said it had won a three-month charter for the 91-meters long AHTS vessel Siem Pearl in Ireland.

The contract is with PSE Kinsale Energy Ltd, the Irish subsidiary of the Malaysian oil giant Petronas, which is currently working to decommission its Kinsale area fields off Ireland.