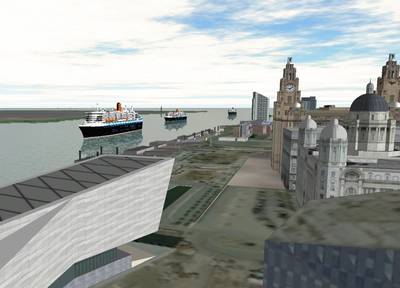 BMT ARGOSS, a subsidiary of BMT Group Ltd, has assisted Liverpool Pilots in its planning for the visit of Queen Elizabeth, Queen Victoria and Queen Mary 2 to Liverpool in May 2015.

Liverpool Pilots have used BMT’s ‘REMBRANDT’, real and fast time simulation and training tool to undertake detailed planning of how the three vessels will manoeuvre in close proximity in the River Mersey, at the narrowest point close to the Cunard Building downtown.

Cunard's Three Queens will visit the Mersey as part of the celebrations to mark the 175th anniversary of the famous cruise line.

Operating directly from S57 ENC chart data, BMT REMBRANDT is a highly accurate, capable and flexible alternative to Full Mission Bridge (FMB) marine simulators, allowing the user to load any port database with relative ease and at a cost effective price. The system utilises highly accurate ship models that include over 750 parameters, ensuring that the user experiences identical ship to ship interaction, ship to bank interaction, squat and shallow water effects as the real ship would in the same conditions. Tidal current and wind settings can be accurately modelled to accommodate the unique features of a given port. BMT has a long and successful history in deploying REMBRANDT for cruise ships and each of the Cunard Queens has a version aboard.

For the visit of the Three Queens, BMT supplied the detailed models of the three vessels previously developed for Cunard itself so they could be run on the Liverpool Pilots’ existing simulation model of the Port of Liverpool that is used for day to day training and simulation. Liverpool Pilots not only use the BMT REMBRANDT simulator for internal training but also offer training for PEC Holders, pilots from other districts as well as for joint training with local tug masters for escort towage by utilising a second bridge at the same facility.

Utilising BMT REMBRANDT’s Client Server facility, a multi-user mode which enables multiple, human-controlled vessels to operate in a single operational scenario, simulations were replayed in video format with track plots and data information printed or saved electronically, providing an opportunity to analyse the vessel performance and fine-tune the planning for the visit.

Chris Booker, Liverpool Pilots’ Service Chairman and Events River Pilot commented: “Managing the navigation of ships the size of the Cunard Queens in the Mersey is challenging. This makes the detailed planning and co-ordination so essential. By using REMBRANDT we have been able to design a sequence of manoeuvres for the three vessels and practice their execution so that everything runs perfectly on the day.”