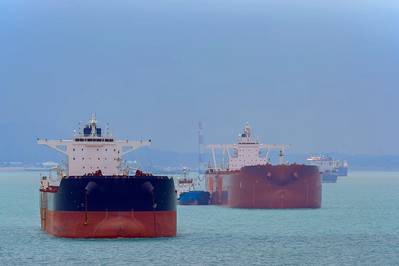 The Maritime and Port Authority of Singapore (MPA) is investigating bunker craft operator Southernpec (Singapore) Pte Ltd for equipment tampering during a bunkering operation, the agency said in an email on Monday.

The MPA had previously suspended Southernpec's operator licence "with effect from 25 April 2019 until further notice," it said in a statement released on Saturday.

"MPA is investigating the bunker craft operator and supplier ... for using a magnet to tamper with the Mass Flow Meter (MFM) of its bunker tanker, Southernpec 7, during a bunkering operation," the MPA said in its email on Monday.

The MPA has suspended both the bunker craft operator licence of Southernpec and the bunker tanker, Southernpec 7, from conducting bunkering operations in port, it said.

"MPA takes a serious view of any attempt to compromise the integrity of the MFM and its system, and will not hesitate to take action against any errant activities," the MPA said.

Southernpec did not respond to a request for comment.

Singapore, the world's largest marine refueling hub, became the first port to mandate the use of MFMs in 2017, making them compulsory for marine fuel oil bunker barges licensed by the port authority.

Along with a crackdown on short deliveries to bunker fuel customers, the meters have improved transparency for buyers and helped boost Singapore's status as a refueling port.

While the suspension prohibits Southernpec from operating bunker crafts in the Port of Singapore during the suspension period, the company is still licensed by the MPA as a bunker fuels supplier in Singapore, according to data on the MPA website dated April 5.

Southernpec in 2018 ranked 30th by volume delivered out of 51 marine fuels suppliers, according to the MPA.