Singapore Looks to Tighten Controls in its Bunkers Supply Chain 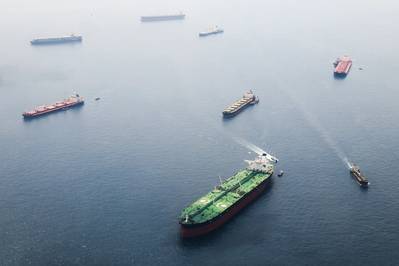 Singapore authorities are looking to apply stricter control measures across the marine fuels sector supply chain, a spokeswoman for the government agency Enterprise Singapore said on Thursday, to boost transparency and accountability in a notoriously opaque industry.

The Technical Committee for Bunkering has submitted a proposal to the national standards body, Enterprise Singapore, for a new standard on quantity, measurement and sampling requirements for transfer of bunker fuel from oil terminals to bunker tankers using mass flow metering, the spokeswoman said.

"This proposed standard complements existing standards to ensure transparent and fair trade in the bunkering ecosystem," the spokeswoman said.

Singapore is by far the world's largest marine refueling, or bunkering, hub where authorities have implemented some of the industry's strictest rules and standards.

The city-state was the first port to mandate the use of mass flow meters (MFMs) in 2017, and in the same year posted record sales of marine fuels at 50.6 million tonnes.

Despite existing measures, the marine fuels sector is notoriously opaque with its fair share of scandals including illegal short-selling of fuel as well as large-scale fuel theft.

More recently, a wave of contaminated fuel that has clogged and damaged engines on hundreds of oil tankers and container vessels in the past months, with no one yet held accountable, has pushed shippers to demand stricter controls around the world.

While the proposed measures are not foolproof, they could enhance transparency and accountability in a meaningful way, two trade sources said.

For instance, mass flow meters at oil terminals would ensure the right quantities of fuels are transferred between buyers and sellers while taking oil samples at terminals could help prevent the spreading of contaminated fuels once they are detected and enhance accountability if quality disputes arise, the sources said.

The sources declined to be identified as they are not authorized to speak to the media.

"The proposal will undergo a one-month public notification to seek views of stakeholders on the scope of the standard at the end of this year," the Enterprise Singapore spokeswoman said.