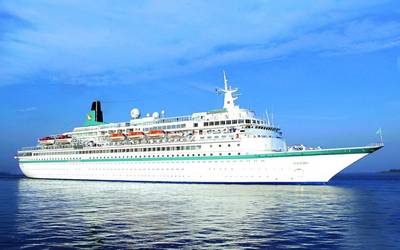 A cruise ship crew came to the rescue of six men from a leaky Tongan fishing boat, who had not had water for three days.

The Rescue Coordination Centre of New Zealand organized for the German cruise ship Albatros to change course at 5 a.m. Saturday, after the fishing vessel crew set off an emergency rescue beacon 400 kilometers west south west of Tonga. The ship diverted 300 kilometers to help the distressed 11.5 meter fishing vessel. RCCNZ also requested an RNZAF P3 Orion to fly from Whenuapai to the position that the beacon was transmitting from.
The Airforce crew dropped emergency equipment and a radio to the boat crew, who were then able to communicate that they could not start their motor due to a flat battery, said Senior Search and Rescue Officer Ramon Davis.
But when the Albatros rendezvoused with the fishing vessel about 2:30 p.m., crew jumped into the water to swim to the ship. Their fishing boat had been taking on water and was unlikely to remain afloat for more than 24 hours. The crew had also run out of drinking water, Davis said.
“They had been in a truly life-threatening situation.”
The Albatros crew helped transfer the men aboard the larger vessel bound for Auckland. A day in the Bay of Islands has been lost for the cruise passengers due to diverting to the rescue.
Davis said that while the fishing boat was not carrying adequate radio equipment, its EPIRB rescue beacon enabled the crew to call for help.
“We do however recommend all vessels carry at least two methods of signaling distress appropriate to their area of operation. The EPIRB alert pinpointed the vessel’s location and we were able to have the RNZAF Orion fly there and discover what difficulty the crew were in.”