Philip Lewis is Director of Research at Intelatus Global Partners.... 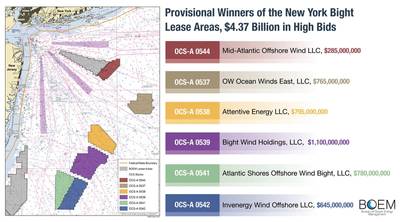 The Bureau of Ocean Energy Management's (BOEM) New York Bight auction concluded February 26, 2022, a sale where six bidders committed to payments of close to $4.4B in total for the right to develop wind lease areas offshore New York and New Jersey.

At least four of the leases have been secured by leading European offshore wind developers: Ocean Winds with GIG, RWE, Edf Renewables with Shell New Energies and Copenhagen Infrastructure Partners have all confirmed bid awards. The ownership of Attentive Energy has yet to be confirmed but is reported to be EnBW and TotalEnergies, despite reports of an Ørsted involvement.

RWE is estimating that the OCS-A 0539 lease area has a potential to support around 3 GW of capacity, close to three times the BOEM estimate.

The auction reflects the increased interest and confidence in the opportunities provided by the U.S. offshore wind segment and also a general market interest in securing offshore wind development sites worldwide.

BOEM has rolled out additional requirements as part of the auction process. On top of offering the highest option price, a successful developer is committing to promoting local supply chains – an in particular factories, ports, transmission assets and vessels. Regular measurement and reporting of the status of these commitments will be required in order to enjoy lower lease payments to BOEM, in addition to state incentives.

The first leases awarded by BOEM in the New York Bight could see offshore wind production before the end of the decade.