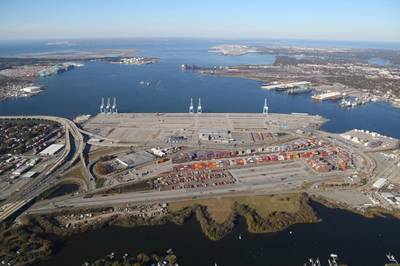 Sweden-based Skanska, one of the country's largest construction firms, has signed a contract with the Virginia Port Authority to rebuild 72 acres of the Portsmouth Marine Terminal in Portsmouth, Virginia, USA.

The project will redevelop approximately 72 acres of the 287-acre Portsmouth Marine Terminal for use as an offshore wind staging port which will improve 1,500 feet of an existing 3,540-foot wharf.

Skanska will include the contract worth $223 million, about SEK 2.3 billion, in the US order bookings for the third quarter of 2022.

The redevelopment of the marine terminal supports the Coastal Virginia Offshore Wind (CVOW) project, which is the largest offshore wind project of its kind in the U.S. Construction began July 2022, and completion is scheduled for 2025.

Dominion Energy, the company behind the CVOW project, earlier this month received approval from the Virginia State Corporation Commission for the project to be constructed 27 miles off the coast of Virginia Beach.

CVOW's schedule calls for construction to be complete in 2026, when it can generate enough electricity to power up to 660,000 homes.

Subsea services company DOF Subsea said Friday it had won multiple contracts in the U.S. Gulf of Mexico. The company has…