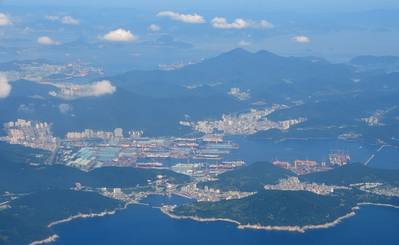 The South Korean government on Monday called on striking workers at Daewoo Shipbuilding & Marine Engineering (DSME) to end their month-long siege of a dock at the company's biggest shipyard, which has paralyzed production and is delaying delivery of new vessels.

Finance Minister Choo Kyung-ho called the occupation "outright illegal" and pledged a "stern response based on law and order."

The shipyard near the city of Geoje, off the country's south coast, is one of the world's largest. Some 100 subcontract workers of DSME went on strike and took over the shipyard's main dock on around June 22, demanding a 30% pay raise amid signs of a rebound in business as orders flooded in amid the Russia-Ukraine crisis.

The siege has delayed the delivery of a very large crude oil carrier (VLCC) and halted the construction and the launch of three other VLCCs, the South Korean government, and DSME said on Monday.

DSME says that as well as occupying the dock, the workers have destroyed equipment there. On Monday, the company, which swung into the red in 2021 and before that required state aid, said it was losing 26 billion won ($19.80 million) a day due to the strike resulting in an accumulated loss of about 570 billion won as of July 14.

The strike threatens the livelihood of some 100,000 DSME workers and the company's partners, DSME said.

"The illegal occupation ... is an irresponsible action that jeopardizes the trust the South Korean shipbuilding industry has built," Finance Minister Choo said at a news conference, without elaborating on what response might be taken.

The siege comes as orders are flooding in as European countries rush to ramp up liquified natural gas (LNG) imports to replace Russian gas supplies in the wake of the Ukraine crisis.

South Korea is the world's largest shipbuilder and won 71% of global LNG carrier orders in the first half of this year, data from British shipping's services provider Clarkson Plc showed.

The strike poses a financial threat for DSME as it tries to recover from debt with the help of public funds. DSME has received more than 7 trillion won ($5.33 billion) in state aid since 2015 after its debt surged due to the 2008 global financial crisis.

DSME said it had won orders for 18 liquified natural gas (LNG) carriers this year. It reported an operating loss of 470 billion won for January-March this year, more than doubling a 213 billion won loss a year earlier.