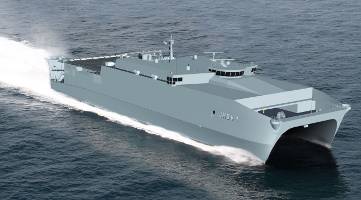 Just over six months after the official opening of Austal’s new Module Manufacturing Facility (MMF) in November 2009, Austal USA hosted a keel-laying ceremony at its shipyard in Mobile, Alabama on July 22, to signify the erection of the first modules on the U.S. Department of Defense’s next generation multi-use platform, the Joint High Speed Vessel (JHSV). This is part of a 10-ship program potentially worth over $1.6b.

Keel Laying is the formal recognition of the start of the ship’s module erection process. In earlier times it was the “laying down” of the central or main timber making up the backbone of a vessel. Today, fabrication of the ship modules begins months before the units are actually joined. However, the keel laying symbolically recognizes the joining of modular components and the ceremonial beginning of a ship.

Spearhead (JHSV 1) will be a US Army vessel (USAV) and its name represents a major feature of the Regimental Insignia of the Transportation Corps. The insignia is a gold color metal and enamel device consisting of a ship's steering wheel bearing a shield charged with a winged vehicle wheel on a rail, all gold, centered upon a brick red spearhead point up, all standing upon a curving gold scroll spanning the lower tips of the spearhead and inscribed, "Spearhead of Logistics," in blue letters.

The ceremony signified the erection of the modular components that will form part of a 338 ft aluminum catamaran capable of transporting troops and their equipment, supporting humanitarian relief efforts, operating in shallow waters, and reaching speeds in excess of 35 knots fully loaded. This is the first of a class of 10 vessels to be operated by both the US Army and Navy.