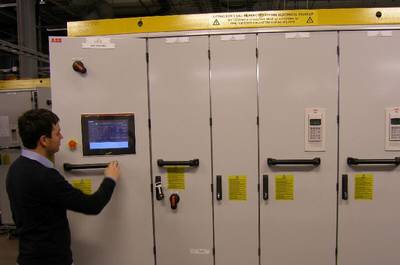 Modular liquid-cooled drives and PLCs from ABB have been included in VARD ELECTRO’s innovative, application-specific propulsion and thruster power solutions for offshore supply vessels. The electric motor propulsion technology designed by VARD ELECTRO is used on a series of six platform-supply vessels (PSVs) - the first two of which currently are being built in Japan.

VARD ELECTRO looked for a drives and control supplier that could provide a highly configurable drives platform, and chose drives from ABB's ACS800 range, with control provided by ABB's AC500 PLCs. The high degree of modularity of both the controller and drives, the availability of sophisticated PLC development tools in the form of ABB's Automation Builder engineering software suite - together with valuable local programming and HMI capabilities of the drives themselves - provided the economy and versatility of platform that VARD ELECTRO was looking for. These system components also provided a number of tangible performance advantages for this particular motor control application. They include fast real-time control updates and low harmonics power conversion of the drives, and compactness that comes from liquid cooling - an extremely valuable feature for the packed OSV engine rooms housing the main engines and thrusters.

For each vessel of the six PSVs which are being built in Japan, ABB is supplying five PLC-controlled variable-speed drives to control a total of over 6MW of power: two 2MW drive systems for the main engines, two 730kW drives for bow thrusters, and one 730kW drive for a dual-fed bow thruster that is able to survive the failure of either of the vessel's two power generators.

The ABB drives and controller system are now part of VARD ELECTRO's new SeaQ Power intelligent power systems range, which was created during the past year. To support the development process for the new propulsion power offering, ABB initially supplied the company with a small-scale version of the PLC-drive-motor package, plus development tools. Supplying the complete control and drive package ensured that there were no integration problems. ABB's AC500 is also one of the fastest PLCs on the market, and VARD Electro also chose a version of the PLC with one of the fastest processor options - the PM590-ETH - to ensure very good real-time control performance. The PLC is connected to the drive using Profibus DP fieldbus communications.

VARD ELECTRO 's control logic for the propulsion system includes all of the standard control features, as well as numerous variations to optimize performance in a number of situations, including a VARD ELECTRO 'ride through' specification to overcome power supply glitches smoothly, seamless switchovers for dual-fed supply arrangements, and rich local status, alarms/diagnostics and control possibilities on each of the drives - provided via the addition of a touch-screen HMI located on each cabinet's front panel. For this latter task, VARD ELECTRO chose to install large CP660 HMI panels from ABB's state-of-the-art CP600 series, which meet DNV standards - to display information to operators in very clear and detailed forms.

The integration of all these components was simplified by the use of ABB's integrated Automation Builder software, which provides a common development tool for the spectrum of automation components used in this application: PLCs, drives, HMIs, fieldbus, networks and web services.

Before delivering the new electric power propulsion control system, VARD ELECTRO performed detailed testing on the PLC and drive combinations at its test facility in Søvik, Norway. These trials were also witnessed by VARD ELECTRO's Japanese shipyard customer. The integrated control system passed all of its tests and VARD ELECTRO now has shipped the propulsion systems for the first two vessels. The very first vessel with this technology will be launched in mid 2014, and will be destined for use in platform supply applications.