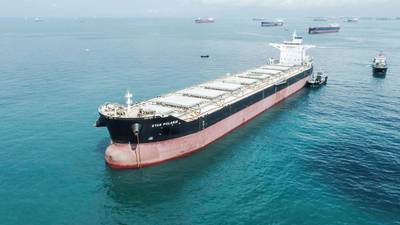 The company has informed that it repaid all outstanding deferred debt amounts originating from the September 2016 restructuring of our finance agreements.

"We have also concluded the refinancing of loans of approximately $617 million with new debt financing totaling over $625 million, smoothening our maturity profile, reducing our interest cost by 70 bps and expanding our banking group with prominent European and Asian financial institutions.  We have also effectively eliminated all debt maturities for 2018 and 2019," said a stock exchange announcement from the company.

"In light of the upcoming IMO regulations, we are proceeding with the retrofitting of our entire fleet with scrubbers before the end of 2019, ensuring compliance ahead of the January 1st 2020 implementation date,” Pappas stated.

Star Bulk took, during last month, the delivery of the vessel M/V Star Bright, a 2010 built Supramax vessel, as part of the previously announced transaction for the acquisition of three firm plus four optional vessels from E.R. Capital Holding GmbH KG.

As part of the renewal of its fleet, on November 16th it has taken delivery of the vessel M/V Star Anna, a 2015 built Ultramax vessel, which has been acquired from a third party.