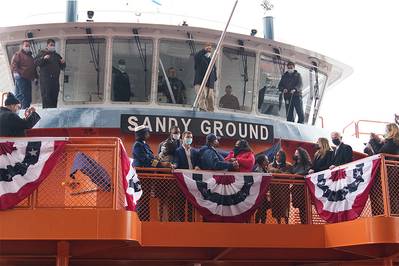 “I am honored to commission a new Staten Island Ferry named for a community of New Yorkers who represent the best of our city and our country,” said Mayor Adams. “The settlers of Sandy Ground were our ancestors, and they worked hard to build a vibrant community that became a safe haven for so many seeking freedom. This boat will forever be a testament to them, their legacy, and their contributions to the New York City we live in today.”

“With the naming and dedication of the Sandy Ground, along with the adoption of the entire state-of-the-art Ollis-class fleet of ferries, which have received international acclaim, the New York City Department of Transportation not only honors the legacy of the diverse community that calls Staten Island home, but shows their passionate commitment to the safe and secure operation of the busiest ferry service in the country,” said Captain Zeita Merchant, commander, New York Sector, U.S. Coast Guard. “I am especially honored as the first African American captain of the Port of New York to soon sign the official certificate that will forever etch the Sandy Ground’s legacy in New York Harbor.”

New York’s first free Black community, Sandy Ground, was settled in 1828, when ferry boat operator Captain John Jackson became the first Black person to own property on Staten Island, buying in what is now the South Shore community of Rossville. Over time, Sandy Ground was settled by Black oystermen who fled Maryland’s more restrictive laws. New York’s booming oyster trade allowed residents there to own their own property, boats, and businesses.

A state-of-the-art, $85 million, 4,500-person boat, the Sandy Ground is the second of three new ferries built by Eastern Shipbuilding Group that will enter service this year, which are collectively known as the Ollis-class vessels. Together, the three boats represent a transformative upgrade for the nation’s busiest municipal ferry system; the three new ferries are larger, more modern, and better equipped for extreme weather than the existing fleet. They will feature popular design elements of past Staten Island ferries, phone charging outlets, and comfortable seating, as well as an oval upper-deck promenade that will, for the first time, serve as an outdoor “walking track” for riders.

The Sandy Ground is expected to be in service by this spring. The first boat in the class, the Staff Sergeant Michael H. Ollis, took its inaugural ride earlier this month. The final Ollis-class ferry is expected to be commissioned later this year.

“This vessel honors our nation’s African-American heritage and will tell the story of the landmark Sandy Ground community,” said Joey D’Isernia, president, Eastern Shipbuilding Group, which built the Ollis-class ferries. “These incredible vessels are receiving international recognition for their superior design and capabilities. We thank our partners for their dedication and exceptional quality in the production of these ferries.”