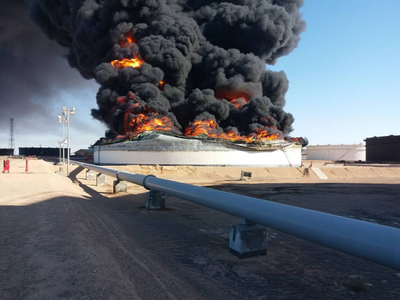 One of two oil storage tanks ignited amid clashes at the Libyan oil port of Ras Lanuf has collapsed after burning for two days, a local engineer and a fire fighter said on Tuesday.

Ras Lanuf's storage tank No. 12 was set on fire on Sunday, three days after another storage tank, No. 2 caught ablaze during an attack by an armed group.

Libya's National Oil Corporation (NOC) has said that at least 400,000 barrels of storage capacity has been lost due the fires.