HII Delivers Submarine Ahead of Schedule 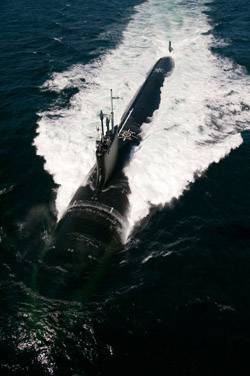 Huntington Ingalls Industries has announced that its Newport News Shipbuilding (NNS) division delivered the Virginia-class submarine California (SSN781) to the U.S. Navy yesterday. The delivery came more than eight and a half months early to the contract date and nearly five months faster than NNS' previous delivery of New Mexico.
California, the world's most modern and sophisticated nuclear-powered attack submarine, recently returned to NNS following the successful completion of its third and final round of sea trials."This is the day that shipbuilders work toward," said Becky Stewart, vice president for submarine programs at NNS. "Delivery marks the passing of ownership from the shipbuilder to the Navy, and we couldn't be more proud of this ship and the shipbuilders that built her. Our team put a lot of hard work into this submarine, and it shows. California is the fourth Virginia-class delivery for us, and each successive ship has been delivered with the highest quality at a lower cost and shorter schedule."

California is the eighth submarine in the Virginia class and the first delivered by NNS since the return of the Newport News Shipbuilding name. The ship's construction began Feb. 15, 2006, and the keel was laid during a ceremony held May 1, 2009. California was christened Nov. 6, 2010, and launched Nov. 13, 2010. The commissioning has been scheduled for Oct. 29 by the Secretary of the Navy.

Newport News Shipbuilding, one of only two shipyards capable of designing and building nuclear-powered submarines, is teamed with General Dynamics Electric Boat to build Virginia-class submarines. Designed to meet the Navy's requirements in a post-Cold War era, Virginia-class submarines use advanced technologies to increase firepower, maneuverability and stealth. The 377-foot long submarines are capable of submerged speeds of more than 25 knots and can stay submerged for up to three months at a time.