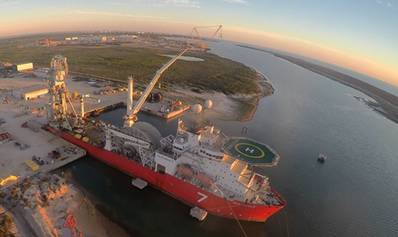 Engineering firm, a major supplier to the oil industry, has decided to pay a regular dividend and buy back stock as it swung to a full-year profit in 2021 and its outlook improved, the company said on Thursday.

Subsea 7 said it "firmly" believed that the market recovery was underway based on increased interest from its customers and it now expects its 2022 earnings to be "in line or better" than last year.

Its Oslo-listed shares rose 6.5% by 1019 GMT, on track for their biggest daily gains in some 18 months, following the release of its October-December and full-year earnings.

Analysts said the share price rose on the dividend decision and improving outlook, and that the oil service sector, which has fallen out of investors' favor in recent years, could be helped by the changing geopolitical situation.

"There is a political awareness that you can not rely on Russian oil and gas supply, and you need to invest more (in the West)," Carnegie analyst Frederik Lunde said.

"Renewables are fine, but they would not move the needle in the short-term," he added.

Subsea 7 provides seabed-to-surface engineering and construction services for the offshore oil and gas industry, as well as for developers of offshore wind farms.

Orders from renewable energy developers accounted for $1.2 billion of the company's total backlog of $7.2 billion at the end of 2021.

"We are confident that our strong pipeline of prospects will translate into new orders during the coming year," the company added.