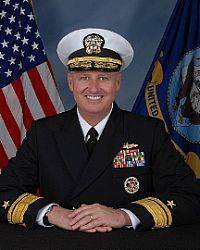 In a move that has yet to be officially posted, Department Of Transportation Secretary Ray LaHood has reassigned Rear Admiral Philip H. Greene to a position at the National Defense University. Yesterday, Greene resigned at about 1000 hours in a staff meeting at Kings Point. He had been Superintendent at the nation's only federal maritime academy for about a year. MarineLink inquiries to Marad Public Affairs Officers for clarification have so far gone unanswered.

Separately, a Kings Point Alumni bulletin was posted and distributed to membership, which read, in part, "The 'change in leadership' announced at the Academy today is most unfortunate for all associated with Kings Point. RADM Greene has provided an extraordinary effort to effect positive change for the present, and the future, of our alma mater. His appointment away from the Academy was in no way his choice, or a positive move for Kings Point, RADM Greene, the KP Alumni, the Regiment of Midshipmen, or any involved stakeholders. This is a most difficult time for Kings Point. We are at a strategic point in our progress, which will require a professional plan of action that is decisive, and with a unified effort."

RADM Greene will now serve at the National Defense University as Chair of their Department of Transportation.