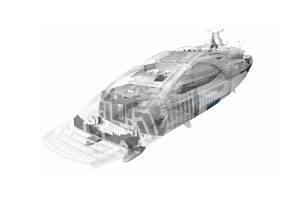 The designer Adrien Jousset (ASK Yacht Design) and naval architect Sylvain Julien (BMT Nigel Gee), have been selected as one of five finalists in the World Superyacht Awards, Young Designer of the Year 2009, for the Ostria design.

“The high standard of entries presented the judges with no easy task in selecting the finalists,” stated Trevor Blakeley, Chief Executive of The Royal Institution of Naval Architects and Chairman of the judging panel. “The judges were impressed by the effort and quality of work presented, reflecting the undoubted talent of today’s young naval architects and marine designers, which surely bodes well for the future of the industry.”

Ostria not only has a radical look but has also been developed to provide an answer to an environmentally conscious owner. Throughout the project the focus has been set on producing a realistic and feasible solution to reduce the environmental impact of a Superyacht. Early in the project it appeared that a carbon free propulsion system was unrealistic. The power production capacity required to propel a 230 ft monohull to any decent speed across an ocean is far too demanding compared to any means of renewable, carbon free, energy production. Even the hotel load requirement could not be answered properly with such solutions unless a significant volume of the yacht was dedicated to this purpose.

The choice of the diesel electric propulsion plant therefore came naturally to provide the necessary flexibility to take advantage of secondary, renewable, carbon free means of energy production (existing or near term technology). Podded propulsors have been selected for their high efficiency but also for the flexibility they provide in the design of the general arrangement.

Where the machinery room is traditionally located; a large summer lounge with recreational facilities including sauna and gymnasium has taken its place. This provides the guests with a unique experience of proximity to the sea.

Ostria has been equipped with 370 m2 of solar panels, and a 13 ft tall retractable wind turbine estimated to reduce the amount of carbon emission by approximately 800 tonnes per year through the reduction of fuel consumption. The solar panel and wind turbine installation have been designed to become a fully integrated feature of the vessel style.

An in-depth study of the vessel’s main systems has also been undertaken to limit the hotel load as far as practically possible. From climate control to rain water collection, most solutions have been studied to assess their feasibility in the marine environment with the aim of reducing the overall energy consumption.

The annual World Superyacht Award - Young Designer of the Year is organized by The Royal Institution of Naval Architects (RINA) in association with Boat International, and sponsored by Camper & Nicholsons International. The overall winner will be announced at the awards ceremony in London during May.