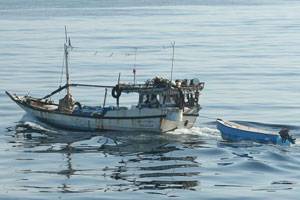 Eight suspected pirates apprehended by crew members from Royal Navy frigate HMS Cumberland off Africa's east coast last week have been handed over to the custody of the Kenyan Police today, Tuesday 18 November 2008.

The suspected pirates were caught on Tuesday 11 November 2008 when HMS Cumberland, deployed to the Gulf of Aden, saw a Yemeni fishing vessel, which had earlier taken part in an attack on a Danish Merchant Vessel.

After various non-forcible methods failed to stop the fishing vessel, a Royal Marine boarding party was despatched in rigid inflatable boats from HMS Cumberland to intercept the vessel. The boarding party boats circled the vessel in an attempt to encourage it to stop. An exchange of gunfire ensued during which two personnel believed to be Somali pirates were shot and killed in self-defence. The fishing boat's crew surrendered, thus allowing a compliant boarding.

The Yemeni vessel and its crew were released while the suspected Somali pirates were subsequently transferred to RFA (Royal Fleet Auxiliary) Wave Knight which earlier today docked in Mombasa to hand them over to the Kenyan Police, who will seek prosecution through the Kenyan courts.

Minister for the Armed Forces, Bob Ainsworth, who is currently visiting Kenya said while in Nairobi today:
"This is clear evidence that we will take every opportunity to combat the pirates who disrupt legitimate trade and add significant costs to goods UK consumers rely on.

"We are sending a strong message to pirates that their activities will not be tolerated and that the global community is united in its efforts to deter and disrupt them.

"The Royal Navy is actively contributing to international counter-piracy efforts around the Horn of Africa and I am pleased to announce that, earlier today, the Royal Navy successfully completed a counter-piracy operation by handing over to the custody of the Kenyan Police eight suspected pirates interdicted on 11th November during an incident at sea."

HMS Cumberland is currently the UK's contribution to the NATO mission in the Maritime Security Patrol Area, providing security to shipping transiting the Gulf of Aden.

Mr Ainsworth added:
"I would like to pay tribute to the crews of HMS Cumberland, RFA Wave Knight and to the Royal Marines, whose bravery and professionalism played a critical part in the successful conclusion of this operation. I am extremely proud of the men and women involved. HMS Cumberland has since resumed her counter-piracy patrol duties.

"But we are no under no illusions about the scale of the challenge presented by piracy. This has been underlined by the hijacking of the Merchant Vessel Sirius Star on Saturday. The taking of such a large vessel so far out to sea represents a step change in capability for the pirates. Alongside our international partners, Her Majesty's Government is deeply concerned, not least because two of the crew are British. Our thoughts are with the men and their families at this difficult time. We call on those holding the men to release them and the rest of the crew immediately."

Triton Knoll, a offshore windfarm which is being constructed 33km away from the coast of Lincolnshire in the North Sea, confirmed…