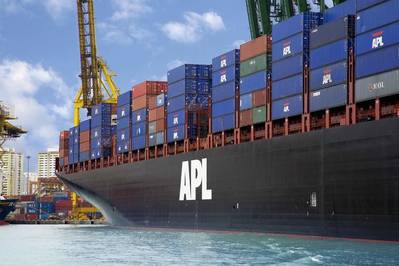 APL has been awarded the silver rating for its 2017 Corporate Social Responsibility performance by EcoVadis, a trusted name that provides supplier sustainability ratings for global supply chains.

As the rating places APL among the top 30 percent of companies evaluated, it acknowledges APL’s continual sustainability achievements since earning a bronze rating for the same assessment in 2015.
Nicolas Sartini, APL Chief Executive Officer said, “Our improved rating demonstrates APL’s commitment to steer forward in our sustainability journey to ensure sound environmental, social and ethical business practices in all our business activities. We pride ourselves as a responsible carrier and will continue to strengthen our policies and practices to make a meaningful impact to our customers’ supply chains.”
Benchmarked against four key sustainability performance indicators – environment, labour practices and human rights, fair business practices and sustainable procurement, APL’s scorecard noted a marked improvement in its environmental performance.
The assessment evaluated APL’s continual improvements in operational efficiencies, fleet and voyage optimisation that led to its highest fleet carbon dioxide emission reduction of 48% in 2016 compared to its base level in 2009.  Navigating ahead, APL is resolved on reducing carbon dioxide emissions by 30% between 2015 and 2025, a target set by the CMA CGM Group.
In reducing emissions such as sulphur oxide and protecting ocean biodiversity, APL has persisted with cold-ironing and ballast water treatment development through technology innovation and clean energy sources amongst others.
As it remains steadfast in protecting endangered species by prohibiting shipments such as shark fin, APL recently also became a signatory of the International Chamber of Commerce’s Declaration of Intent to prevent the transportation of counterfeit goods. Beyond its operations, APL has sought to support its customers in improving their environmental footprint when shipping with APL through active stakeholder and customer engagements.
APL’s sustainability course has been applauded by the industry. Last month, APL received the ‘Best Green Shipping Line’ award from HAROPA, the French port of Le Havre for the third consecutive year for its exemplary environmental performance in reducing air emissions beyond the standards set by the International Maritime Organisation.
In September, APL was named ‘Ship Operator of the Year’ at the Safety at Sea Awards 2017 in recognition of APL’s safe working practices and initiatives which have demonstrably improved the work life and welfare of sea crew on board APL-operated vessels.