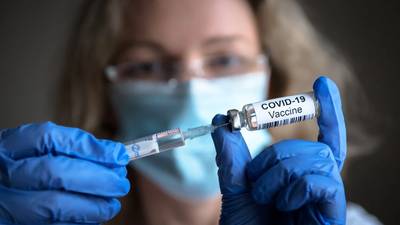 An 89-year-old passenger ship, out of commission due to the coronavirus pandemic, was repurposed on Tuesday as a COVID-19 vaccination center for thousands of residents from cities on Lake Constance.

The 500-passenger MS Thurgau normally carries tourists and commuters between German and Swiss cities on Europe’s third-largest lake. In coming weeks it will serve as a floating inoculation hub for northern Swiss towns Romanshorn, Arbon and Kreuzlingen.

Regional officials emphasized the ship’s practicality since it can sail from harbor to harbor, earning it the nickname “vaccine vaporetto” with some locals.

“I’ve heard of a fondue ship, and a spaghetti ship, but this is my first shot ship,” Switzerland’s Health Minister Alain Berset told reporters just after the first people to be vaccinated walked the gangway.

Switzerland reported just over 1,600 new infections on Tuesday, bringing its total to 526,000, with the cases of fast-spreading variants doubling every week. Nearly 8,800 people have died.

Aboard MS Thurgau there are two shot stations capable of vaccinating 24 people per hour - one every five minutes - or 168 people daily during a seven-hour shift.

As more vaccines arrive in Switzerland, stations can be expanded to eight.

For the first week, the ship will be in Romanshorn, a historic lakeside grain trading center, followed by two weeks in larger Kreuzlingen.

After another week in nearby Arbon, the vessel will make the return voyage to Romanshorn, so those inoculated earlier can get a required booster shot.

“I’ve already got my second appointment, also for the ship,” said one man as he left the vessel.

Only Moderna shots are being used aboard the MS Thurgau, since the 10-dose vials are slightly easier to prepare in the ship’s cramped quarters, medics said.

The canton of Thurgau initially considered creating vaccine centers aboard buses, but eventually opted for the idled pleasure cruiser.

“We wanted to figure out just how we could vaccinate as many people as possible, with as few vaccination centers as were necessary,” said Urs Martin, a Thurgau elected official.

Like elsewhere in Europe, the tourism-reliant Lake Constance region has been broadsided by the pandemic.

The initial round of shots aboard the MS Thurgau is planned for the next 12 weeks, said Adriano Mari, leader for all of Thurgau’s vaccination centers run by private hospital group Hirslanden, a unit of South Africa-based Mediclinic.

He hopes an extension beyond this maiden voyage won’t be necessary.

“Hopefully by then, things will have eased and the ship can return to carrying passengers on its regular route,” Mari said.