Tanker Boarded by Somali Police is Safe and Underway 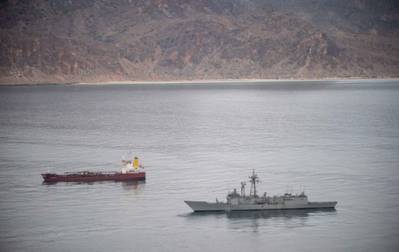 A Panama-flagged ship boarded by Somali police is safe and underway, the EU Naval Force said on Saturday, after conflicting reports two days earlier about whether it had been hijacked by Somali pirates.

The Aegean II had originally altered its course due to a damaged hull and after local police had boarded it, "there had been certain incidents on board the vessel", the EU force said in a statement.

"At this point, it cannot be classified as a maritime security incident, but a more detailed investigation is in progress," the statement said, noting that the ship's progress was being closely monitored by the ESPS Santa Maria, a Spanish warship operating as part of the naval force.

A regional governor in Somalia told Reuters on Thursday that the ship had been hijacked as it carried a cargo from the United Arab Emerites to Mogadishu port. But port authorities told the EU force that local police had boarded it as the ship was drifting after it had been damaged, the EU statement said.

Piracy expert Jay Bahadur noted that Somali security forces, often made up of local militias, had previously hijacked vessels. He said on Thursday he had received reports that the Somalis who boarded the vessel had robbed the crew and disarmed a private security team.

At the height of their power in 2011, Somali pirates launched 237 attacks off the coast of the country, the International Maritime Bureau says, and held hundreds hostage.

But the number of attacks plummeted after shipping firms implemented better security protocols and a coalition of international naval forces stepped up patrols. The last successful hijacking in Somali waters was in 2017.