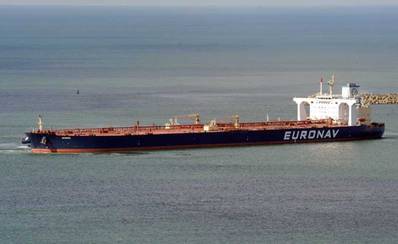 The group, one of the largest tanker companies in the world, said COVID-19 restrictions were depressing demand for crude oil and high levels of compliance with OPEC+ output supply cuts have restricted the number of cargoes available for commercial transit, deferring a recovery in freight rates.

The Antwerp-based company posted earnings before interest, taxes, depreciation and amortization (EBITDA) of $28.6 million, down from $327.9 million a year earlier, but above a Refinitiv forecast of $23.9 million.

Euronav's loss for the period widened to $71.0 million after $58.2 million in the previous quarter, but was less than the $74.7 million estimated in a Refinitiv poll.

The Organization of the Petroleum Exporting Countries and allies, a group known as OPEC+, in April stuck with plans to gradually ease output restrictions.

OPEC+ is set to deliver 2.1 million barrels per day of additional crude between May and July after record cuts in 2020 helped oil prices to recover from historic lows.

Euronav said the blockage of the Suez Canal in late March underlined the difficulty of recovering from the pandemic impact as even a major disruption of the vital shipping artery did little to boost freight rates because of a short-term oversupply of tonnage.

Exports of gasoline and blend stocks from Asia to the United States rebounded in May from April, including two rare shipments from India…