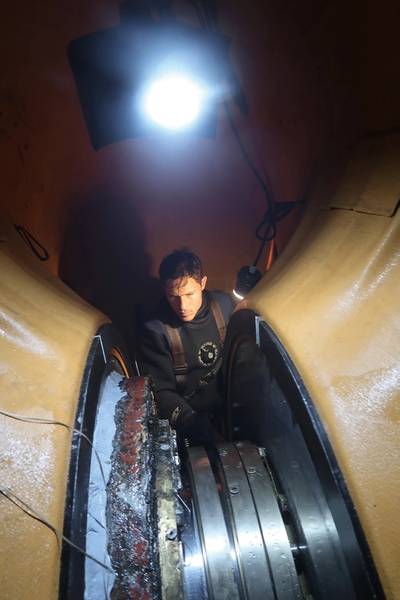 Hydrex mobilized diver/technician teams to vessels in the Netherlands and Australia to carry out stern tube seal replacements. In Flushing the repair was carried out on a 200-meter car carrier, and in Port Burnie, Tasmania, on a 188-meter RoRo vessel.

Both ships were leaking oil, making an on-site repair necessary. Using a Hydrex flexible mobdock they were able to carry out these operations on-site and underwater, saving a trip to drydock.

Despite the remote location of the RoRo vessel, the company’s technical department was able to make all practical logistic arrangements and organize a mobilization of the equipment very swiftly. In the recent past they have carried out several operations in Australia, including repairs on this RoRo’s sister ship.

After arriving on-site, the diving team first set up a monitoring station next to the vessel. The operation then started with a thorough underwater inspection of the stern tube seal assembly.

Next the divers cleaned the assembly and installed the flexible mobdock, thereby creating a dry underwater environment so that they could work in drydock-like conditions.

The split ring was then disconnected and brought to the surface to be cleaned. After cleaning the entire assembly, the divers removed the first seal and replaced it with a new one which was then bonded. This was done in cooperation with the supervising OEM technician. The procedure was repeated with the other three seals.

A successful operation was concluded with leakage tests, the removal of the flexible mobdock and the reinstallation of the rope guard.

A team traveled from Antwerp to the ro-ro car carrier’s Netherlands location on a Hydrex workboat. These workboats are fully equipped as dive support stations with hydraulic cranes, winches, nautical and communication equipment, and a dive control room. They are stationed in Antwerp and Rotterdam and can be used for a wide range of operations in Belgium, the Netherlands, the United Kingdom and France.