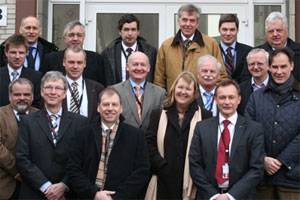 On March 5th the working group for “Defense Technology” held its sixtieth conference at the premises of Raytheon Anschütz. The working group is an organization of companies from German federal state Schleswig-Holstein, who are engaged in the defense business. The stated aim of the working group is to point out on the technological, economical and security-political relevance of defense technology.

In order to share information, the working group gets together regularly. Based on its reputation as manufacturer of navigation systems for world-wide navies, Raytheon Anschütz was elected to organize the sixtieth conference, which certainly is a little jubilee. In the foreground were the dialogue with Mr. Dr. Johann Wadephul, who is the chairman of the parliamentary party CDU within the legislative assembly of Schleswig-Holstein, and the preparations for the eleventh “Wehrtechnik-Dialog”, which is a political conference, in Berlin mid of June.

Within its company presentation, Raytheon Anschütz has demonstrated its new multifunctional systems. The systems combine the functions of navigational radar, electronic sea chart and centralized navigation data display at one dedicated position on a ship’s bridge, providing access to all necessary information for navigation.

First Subsea, part of the First Tech Group based in Aberdeen, has won the inter-array cables protection contract from DEME…