Texas LNG Gets OK from US Coast Guard 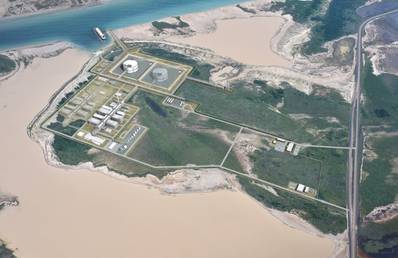 Texas LNG Brownsville LLC said it achieved another development milestone with the U.S. Coast Guard’s Letter of Recommendation to the Federal Energy Regulatory Commission (FERC) confirming the suitability of the Brownsville Ship Channel for the project’s marine traffic as it relates to safety and security.

“After reviewing the information in the applicant’s [Letter of Intent] and Waterway Suitability Assessment and completing an evaluation of the waterway in consultation with a variety of state and local port stakeholders, I recommend that the Brownsville Ship Channel be considered suitable for … accommodating the type and frequency of LNG marine traffic associated with this project,” stated U.S. Coast Guard Captain R.A. Hahn, Captain of the Port, Corpus Christi, Texas, in his letter to FERC.
In its review of Texas LNG’s Water Suitabilitity Assessment, the Coast Guard addressed public comments that raised a number of issues, including safety, security, potential environmental impacts, economics, public outreach, and physical characteritics of the ship channel. In addition, the Coast Guard considered not only Texas LNG’s expected LNG carrier traffic, but also recognized other traffic transiting through the Channel including offshore rigs, aircraft carriers, fishing vessels, recreational vessels, towing vessels, non-piloted barges, as well as potential traffic from other proposed LNG projects. The Coast Guard concluded that the waterway is suitable to handle current and anticipated incremental traffic from the Texas LNG facility.
The Texas LNG facility is being designed to accommodate LNG carriers with nominal LNG capacities up to 180,000 m3 and dimensions on the order of 977 feet long and 151 feet wide. The Brownsville Ship Channel has a current depth of 42 feet, with full U.S. Congressional authorization to deepen its channel to 52 feet.
The total inbound transit from the Gulf of Mexico sea buoy (pilot boarding area) to the future Texas LNG terminal berth is approximately seven miles.
Texas LNG said it expects full FERC approval and Final Investment Decision (FID) for the development of the liquefaction project in Brownsville, Texas, in 2019, and first phase production of 2 million tonnes per annum of LNG is expected to begin in 2023.
Texas LNG has secured long-term offtake term sheets from LNG buyers in China, Southeast Asia and Europe, and is planning to begin pre-FID Detailed Engineering in 2018 upon closing of its current funding round.