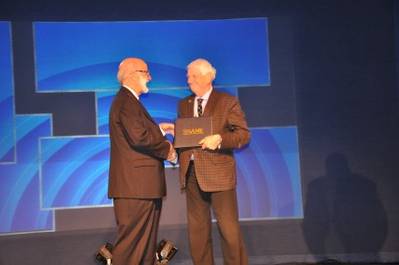 At the opening session of the 2016 SNAME Maritime Convention in Bellevue, Washington, George A. (Sandy) Thomson was elected a Fellow of the Society of Naval Architects and Marine Engineers (SNAME).
According to the Society, the grade of Fellow is accorded exclusively to “individuals who have made outstanding personal contributions to naval architecture, marine or ocean engineering, or allied disciplines through significant achievements in design, research, production, operation, education or associated management.”
This is quite an honor for Thomson who has a long family history in the maritime industry. Thomson’s great, great grandfather was a deep sea captain sailing the Great Lakes before becoming a lighthouse keeper; his uncle was head of Shell Canada when Shell maintained a fleet of steam powered tankers operating on the Great Lakes; while his father owned and operated Thomson-Gordon, a marine and industrial products supplier in southern Ontario.
Sandy attended Northrup University in California obtaining a Mechanical Engineering degree and eventually migrated back to Canada to work in the family business in 1965. His passion for the marine industry redirected the family business from distributing engineering supplies to manufacturing propeller shaft and rudder bearings – thus leading to the development of Thordon Bearings. Sandy is currently owner and Chairman of the Board of Thomson-Gordon Group, the parent of Canada-based Thordon Bearings Inc.
As Sandy has spent many years growing and developing this business around the world, on one of his sales trips to Russia in 1989 he purchased a steam powered tug named Rudokop. He fell in love with this vessel and retrofitted it with Thordon bearings and seals. Rudokop also served as a floating showcase to illustrate the performance of Thordon products and as a training ground for many Thordon employees and Distributors. Sandy captained the tug travelling to over 300 deep sea ports in Eastern and Western Europe.
After the Rudokop sale in 2007, Sandy shifted the company focus to pursuing sales in the commercial ship and naval markets. Thordon currently supplies over 45 navies and has over 550 commercial ships running its COMPAC water lubricated propeller shaft bearing systems.