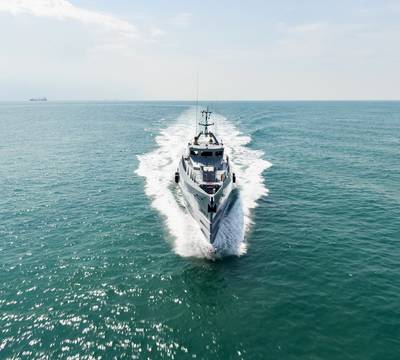 In one week Damen Shipyards Group has launched an FCS 3007 Patrol vessel and, in cooperation with the same owner, SR Platforms, successfully completed the sea trials of two FCS 4008 Patrol vessels.

This brings the number of Damen ships in SR Platforms’ fleet up to four, following the delivery of its first FCS 3307 Patrol in October 2015.

These milestones follow the contract signings taking place just a few months earlier, with those for the FCS 4008 vessels occurring in July this year and that for the FCS 3007 at the beginning of April. The exceptionally rapid progress on the 4008 vessels was due to their already being available in stock at Damen Song Cam Shipyard in Vietnam. Although constructed to the standard Fast Crew Supplier format, the vessels were rapidly converted to the Patrol specification and various custom modifications made to meet the client’s requirements.

The Damen FCS 4008 Patrol offers all the high-performance seakeeping qualities of the Fast Crew Supplier range thanks to its Damen Sea Axe design. This enables top speeds of 29 knots and a range of over 2,000 nautical miles in sea states that would slow down other vessels of the same size. With spacious accommodation and a 140 sq. m. aft deck they can integrate a wide range of support services into their patrol duties including transporting personnel and cargo plus, with the appropriate equipment fitted, firefighting and oil spill recovery. Defensive features include an internal citadel to protect those onboard from small arms fire.

On delivery, the two Damen FCS 4008 Patrols will immediately be deployed as fast support intervention vessels on a contract with a major international oil company (IOC).