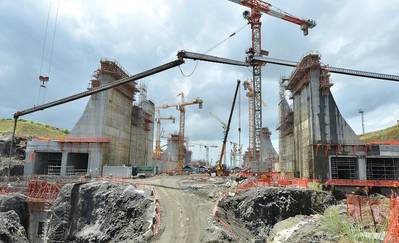 The Panama Canal Authority expects to formally sign a deal next week with a Spanish-led consortium to finish work on expansion of the waterway after a dispute over cost overruns held up completion, an official said on Friday.

"We expect that by Thursday we should be signing said document," Panama Canal Administrator Jorge Quijano told reporters a day after announcing a deal with the GUPC consortium, which is led by Spanish builder Sacyr and Italy's Salini Impregilo.

The deal, which was outlined on Thursday, foresees the consortium finishing work by December 2015 and would require both the Panama Canal Authority and GUPC to each inject $100 million for immediate cash flow needs to fully resume work.

The agreement would also extend repayment of advanced payments made by the Panama Canal Authority to the consortium that are worth $784 million until 2018 at the latest.

As part of the deal, the Canal Authority agreed that the consortium could use a $400 million surety bond through insurer Zurich North America as backing to seek financing.

However, the Zurich part will take up to six weeks to arrange, for which reason the $100 million cash injections were necessary to jump-start work, Quijano told a news conference.

Limited work on the project resumed on Feb. 21 after a two-week stoppage. The dispute has fanned fears of delays that could cost Panama millions of dollars in lost shipping tolls.

Holdups in the massive project posed a setback for companies worldwide that want to move larger ships through the waterway that links the U.S. Gulf Coast to Asian markets.

But he cautioned that if GUPC does not comply with the agreement, the canal will find other ways to complete the work.

"We remain prepared for another option," Quijano said.

The agreement contains safeguards related to the payback of the advances so that if the companies fail to comply they have to return the money straight away, he added.

The overall expansion, of which the consortium is building the lion's share, was first expected to cost some $5.25 billion, but the overruns could increase that to nearly $7 billion.

Sacyr, which receives a quarter of its international revenue from the canal project, reported on Friday a net loss of 496 million euros ($679 million) for 2013.