By Christoph Steitz, Tom Käckenhoff and Arno Schuetze May 18, 2020 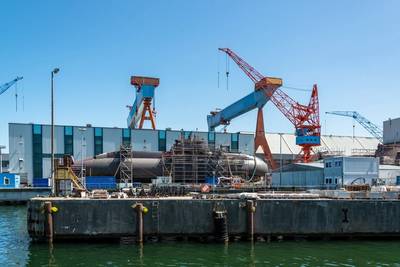 Thyssenkrupp on Monday said it was looking for partners for its steel and warship divisions, singling out just three lines of businesses that will stay within the struggling German industrial icon.

Hoping to stop the bleeding of cash and restore investor confidence, the group also pooled businesses worth 6 billion euros ($6.6 billion) of sales and employing 20,000, about 13% of total staff, that are either to be sold or shut down.

"With this reassessment of the portfolio, we have taken some difficult decisions that were long overdue and will now implement them systematically," CEO Martina Merz said.

"Thyssenkrupp will emerge smaller but stronger from the transformation."

Three divisions -- Materials Services, Industrial Components and Automotive Technology -- will stay with Thyssenkrupp and be developed by the firm. Between them, these business account for 18 billion euros of sales, or 43% of the group's total.

The move to not declare steel as a definite part of Thyssenkrupp's future represents a deep cut in the firm's history, which goes back more than 200 years and has been built on the metal.

For steel and marine systems, which builds submarines and frigates, Thyssenkrupp is pursuing a two-way approach meaning the businesses could be developed with partners remaining in the group, confirming what sources told Reuters earlier.

Shares in Thyssenkrupp, which have lost nearly two-thirds of their value over the past 12 months after a raft of profit warnings and dwindling investor confidence, closed 12.5% higher as a result.

The announcement also accelerates Thyssenkrupp's dismantling, a process that started last year when the group had to abort a plan to form a steel joint venture with Tata Steel and instead sell its crown jewel: elevators.

Sources had told Reuters that contact between Thyssenkrupp and Tata Steel never broke off and that both were still in talks about consolidation.

No time to lose
Business paper Handelsblatt said that Thyssenkrupp was also in discussions with Sweden's SSAB and China's Baoshan Iron & Steel (Baosteel) and that both were interested in a majority of the German firm's steel unit.

Baosteel declined to comment as did SSAB, whose shares also closed 10% higher. Tata Steel Europe had no immediate comment.

Juergen Kerner, deputy chairman of Thyssenkrupp's supervisory board and a key figure at powerful labour union IG Metall, said any consolidation in steel had to be explored under Thyssenkrupp's leadership.

"We reject a holding that operates like a layman in various markets and only serves as a junior partner in the industrial core business that is steel," he said. IG Metall said it favoured a German consolidation with Salzgitter.

The Alfried Krupp von Bohlen und Halbach Foundation, Thyssenkrupp's top shareholder with a 21% stake, came out in support of the plans, adding it continued to believe in the group's potential. "Thyssenkrupp has no time to lose," it said.

Swedish fund Cevian, the No.2 shareholder, said the announcement was an important step for the firm. "It is now crucial that this plan is implemented with urgency and decisiveness," founding partner Lars Foerberg said.

Thyssenkrupp said that a new unit called Multi-Tracks would house those units that led to 400 million euros of cash outflows last year and whose future would be outside the group.

Of those, Infrastructure, Heavy Plate and Battery Solutions will be sold or shut down. For Springs & Stabilisers, Powertrain Solutions, stainless steel unit AST and Plant Technology, which builds chemical, fertiliser and other industrial plants, Thyssenkrupp will seek partnerships or a sale.