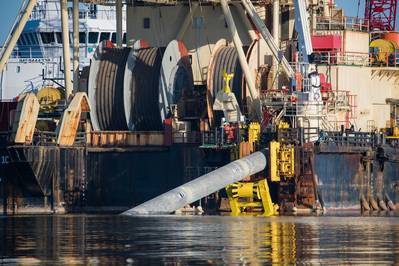 Russia has resumed construction of the politically-charged Nord Stream 2 gas pipeline to Germany, laying pipes after a one-year hiatus prompted by U.S. sanctions, the pipeline operator said on Friday.

An alleged nerve agent attack on Kremlin critic Alexei Navalny in August was the latest political controversy to hit the nearly-completed Nord Stream 2 gas pipeline, as Germany debates whether to halt the project as part of potential sanctions against Russia.

Led by Russia's Gazprom with Western partners, the pipeline, which would double the capacity of the existing Nord Stream 1 link, is more than 90% completed and scheduled to operate from early 2021.

The project has split the European Union, with some members saying it will undermine traditional gas transit state Ukraine and increase energy reliance on Russia.

The United States, keen to increase liquefied natural gas (LNG) sales to Europe, also opposes the pipeline and has targeted some companies involved with sanctions.

Here are some key dates in Nord Stream 2's development:

Gazprom and Western partners start looking into expanding the system with another two pipelines to add a further 55 bcm of capacity. The project is estimated to cost 9.5 billion euros ($11.3 billion).

January: Germany grants Nord Stream 2 a permit for construction and operation in German waters and landfall areas near Lubmin in Mecklenburg-Vorpommern.

January - The U.S. ambassador to Germany warns companies involved in the construction that they could face sanctions if they stick with the project. [https://bit.ly/2FhqaN3 ]

January: Russian President Vladimir Putin says he hopes Nord Stream 2 will be finished by the end of the first quarter of 2021. German Chancellor Angela Merkel says she believes the project is legitimized by European regulation and therefore should be completed. [https://reut.rs/2ZnOML8]

May: Germany's energy regulator declines to grant a waiver of EU gas directives to the operators of the Nord Stream 2 pipeline that require separate operators for the production, transport and distribution of energy on German territory.

May: An EU court throws out a challenge to EU gas rules from the operators of the Nord Stream 1 and Nord Stream 2 pipelines, saying it was up to individual members states to enforce them.

June: Poland starts proceedings against Gazprom, alleging the company has not cooperated with the country's anti-monopoly proceedings regarding Nord Stream 2. [nW8N28600O

August: Poland fines Gazprom 213 million zloty ($57 million) for a lack of cooperation in the matter.

Sept. 3: Pressure mounts on Merkel to reconsider the pipeline, after she says Navalny was poisoned with a Soviet-style nerve agent.

Sept. 11: The premier of the German state of Mecklenburg-Vorpommern, where Nord Stream 2 would come ashore, says the pipeline should not be used to punish Moscow over the Navalny case. Merkel wants to agree a response with EU partners.

Sept. 15: Data shows a Russian ship sailed for the Nord Stream 2 project's supply base in Germany.

Sept. 23: The world's largest group of shipping insurers says it will not insure vessels involved in the Nord Stream 2 and TurkStream gas pipeline projects because of the threat of U.S. sanctions.

Nov. 4: Gazprom files an appeal in a Polish court against that fine.

Nov. 28: Nord Stream 2 says it plans to resume pipe-laying work on a 2.6 km stretch of the pipeline before the end of the year.

Dec. 1: The maritime authority in the German city of Stralsund informs shippers about pipeline-laying activities from Dec. 5 through Dec. 31 in the Baltic sea.

Dec. 11: Nord Stream 2 says Fortuna vessel has resumed pipe-laying work and would lay a 2.6 km section of the pipeline in the German Exclusive Economic Zone.