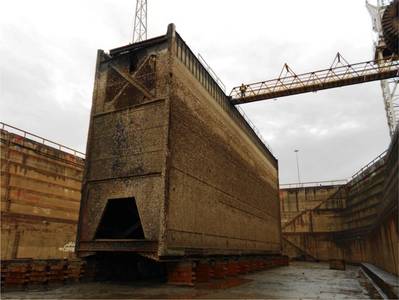 Due to a delay on a private ship repair at the Durban Dry Dock, TNPA has adjusted the project schedule for repairs on the facility’s 35 metre long, 900 ton outer caisson by 18 days.

The facility was due to be nonoperational for two months over August and September. However private ship repair company, Dormac Marine and Engineering, discovered additional work was required on the Africa Mercy’s shaft during a routine repair and survey exercise at the TNPA-owned dry dock. Parts had to be sourced from overseas and the vessel departed from the dock on August 18 instead of July 31.

The two-month nonoperational period at the dock has now been adjusted to start from August 19 – when appointed contractor Channel Construction took full occupation of the dock – to October 20. The expected completion date of the caisson repair project has also moved from November to mid-December.

Durban port manager Moshe Motlohi said, “This was an unforeseen delay, however we remain committed to adhering to the adjusted project schedule for our caisson repair and are working to minimise any further impact on the ship repair industry.”

The 90-year old Durban dry dock is undergoing the third and final phase of a comprehensive repair program on its 35 metre long, 900 ton steel caisson which was deemed unsafe and in need of repair.

Channel Construction is working alongside managing contractor, Sebata Group, which is overseeing the caisson repair project, with technical expertise and quality assurance provided by a team including KwaZulu-Natal’s only naval architecture firm, Naval Africa.

The company is working 24 hour shifts with the majority of the work being carried out offsite at the contractor’s Bayhead workshop. Work includes demolition and waste disposal, structural repair, welding, modification and replacement of structural members and plates, design and fabrication certification, commissioning and final handover.

The outer caisson repair project forms part of TNPA’s large-scale repair program for the dry dock. The authority has accelerated planned refurbishments of existing ship repair facilities at its ports in line with the South African government’s Operation Phakisa initiative which aims to unlock the economic potential of South Africa’s oceans. Under Transnet’s Market Demand Strategy, the plans are a key aspect of TNPA’s R35 billion-plus investments into port infrastructure, capacity and maintenance over seven years ending 2019.