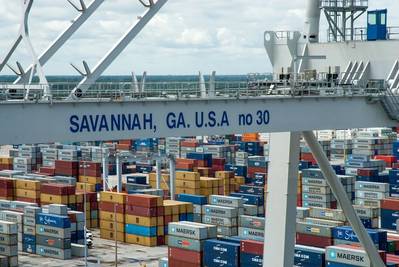 For the first six months of Fiscal Year 2014, the Georgia Ports Authority (GPA) said it has logged 8 percent growth in total tonnage.

From July through December 2013, the GPA moved 14.36 million tons of cargo, up from 13.3 million tons over the same period in the previous fiscal year, GPA Executive Director Curtis Foltz reported to the authority board Monday.

“Strong volumes in container traffic, bulk cargo and auto and machinery units for the month of December contributed to this successful mid-year report,” said Foltz.

In twenty-foot equivalent container units (TEUs), the GPA achieved a 7.4 percent increase to reach 235,311 TEUs in December, or 16,183 more than the same month a year ago.

Auto and machinery traffic increased by 4.3 percent in December over year-ago figures to reach 57,171 units moved, an improvement of 2,343. For FY2014 to date, Colonel’s Island terminal in Brunswick and Ocean Terminal in Savannah have moved 343,065 units, up 6.8 percent or 21,922 cars and tractors.

“Our tremendous growth highlights the increasing importance of the Ports of Savannah and Brunswick to the nation’s international commerce,” said GPA Board Chairman Robert Jepson. “We are well prepared to take on even greater responsibility: We are handling 3 million TEUs a year in Savannah, but we can move up to 6.5 million TEUs without increasing our physical footprint.”

Foltz noted that an omnibus spending bill recently signed into law authorizes the U.S. Army Corps of Engineers to move forward with contracts on the Savannah Harbor Expansion Project. This means dredging to deepen the river channel from 42 to 47 feet will begin this year. The deepened channel will allow the Port of Savannah to better accommodate the larger vessels that are expected to call more frequently with the 2015 expansion of the Panama Canal.