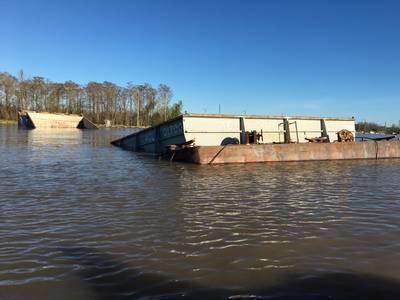 Members from Coast Guard Marine Safety Unit Morgan City’s marine inspections team and investigations team respond to a report of a towing vessel that ran aground on the Gulf Intracoastal Waterway at mile marker 99, near Berwick, La., February 3, 2020. The towing vessel company has hired a salvage company to assist the salvage of the barge. (U.S. Coast Guard photo)

A section of the Gulf Intracoastal Waterway has been closed after a towing vessel ran aground at mile marker 99, near Berwick, La., the U.S. Coast Guard said.

The Miss Odessa was reportedly transiting south-bound on the Atchafalaya River when it turned west onto the Gulf Intracoastal Waterway and hit bottom. The Miss Odessa, in an attempt to break free, tore apart the barge, causing the barge to split in half.

Members from Marine Safety Unit Morgan City’s marine inspections team and investigations team arrived on scene at 8:30 a.m., Monday, to assess the incident. The response teams reported no damage to the Miss Odessa or other five barges. No pollution has been reported in the area.

The Coast Guard has secured all tow traffic in the location of the barge.

The vessel queue as of 2:30 p.m., Monday, was 12 southbound, six westbound, 28 eastbound and four northbound.

The towing vessel company has hired a salvage company to assist the salvage of the barge. A Coast Guard salvage engineering response team is also assisting.