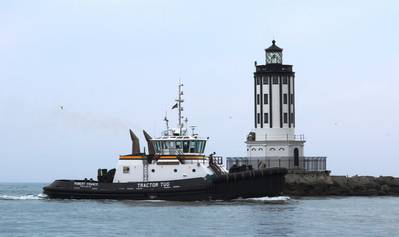 The M/V Robert Franco was built with the most technically and environmentally advanced equipment available. This tug features Tier III engines and cold ironing/shore power capabilities. It also marks the second Tier III engine on a ship assist/escort tug boat, meeting EPA’s low emission standards in the ports of Long Beach and Los Angeles. Compared to Tier 0 engines, Tier III engines reduce the NOX and particulate matter amounts by 90%. Since Harley Marine Service’s inception, their goal has been focused on being the safest and most environmentally responsible marine transportation company and the CAT 3516 Tier III engines are a part of that commitment.

Equipped with 6,800 horsepower and providing 91 tons of bollard pull, the M/V Robert Franco  is the most powerful tug to ever provide ship assist in Los Angeles and Long Beach Harbors. With the growing size of container ships (14,000 TEU) and tankers over 300,000 DWT’s calling on these ports, Harley Marine Services is committed to building higher horsepower tugs in order to accommodate them. Tugs like the M/V Robert Franco  will provide these larger ships with safe navigation in the LA/LB harbors, as well as emergency towing services off-shore.

Harley Marine Services has plans for a second 100’ x 40’ Z-drive ship assist tractor tug to join their fleet this summer, the M/V Ahbra Franco. Both of these tugs are equipped with state of the art Mackay marine electronics, Markey tow winches, as well as firefighting and safety equipment.

CEO and Chairman Harley Franco states “the arrival of this new state-of-the-art tug boat symbolizes Harley Marine Services dedication to the safety of our employees, protection of the environment, and to providing the most advanced, dependable, and committed service to all of our customers.” Harley Marine Services is proud to be a leading provider of marine transportation services in the United States and is dedicated to being the safest, most environmentally responsible, efficient, and customer service oriented company in the marine services business. Harley Marine operates on the United States West Coast (including Alaska), New York Harbor and the US Gulf Coast. Services provided include the transportation and storage of petroleum products, ship assist and escort, the transportation of general cargo and rescue towing. Harley Marine is the parent company of nine businesses specializing in marine services and a bulk liquids terminal business.