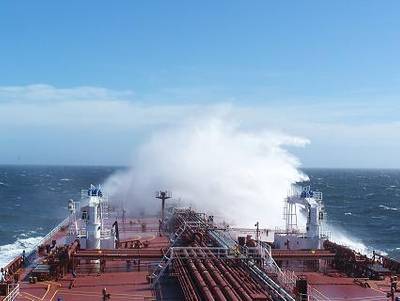 Oil majors and trading houses are set to ship an unprecedented volume of U.S. crude oil to Asia in coming weeks, boosting already high flows to the region due to higher prices from OPEC production cuts.

Traders have estimated that some 700,000 to 900,000 barrels per day is set to leave the United States in February, with the majority of the cargoes headed to Asia.
That volume would be the highest monthly level on record, according to the U.S. Energy Information Administration, helping reduce an U.S. inventory glut that has pressured prices for two years.
The flood could create a supply surplus in Asia, possibly pushing prices for regional grades lower, traders said, as local refiners are ill-equipped to process that flow.
The economics recently became favorable after Brent's premium over U.S. crude widened to the most in nearly a year. The widening differential for Middle East benchmark Dubai over U.S. crude also opened the arbitrage to the Far East.
The U.S. crude cargoes, which will include both light and heavy grades, will reach China, Japan and Singapore, according to four trading sources and Reuters shipping data. Some exports are also headed to Europe and Latin America.
"It's a good time to buy U.S. crude because of the OPEC cut, but our spot room has limitations so we have to compare every cargo," said an official with a Japanese refiner, who declined to be named due to company policy.
Mercuria has booked the Front Balder, a Suezmax, to send crude from the U.S. Gulf to Qingdao, China, according to sources and vessel tracking data. It appears to have stopped in Colombia along the way. A company spokesperson could not be reached for comment.
BP Plc is sending the Cap Guillaume, a Suezmax, from the U.S. Gulf to Singapore next week, according to sources and tracking data. It was not immediately clear if the cargo details would change; a company spokesperson could not be reached for comment.
Shell also booked the Gener8 Daphne, an Aframax, to Singapore. On Friday, it was docked outside of Texas City at the Teppco Seaways Crude Berth. A company spokesperson could not be reached for comment.
BP and Trafigura are said to be marketing at least 3 million barrels of U.S. Eagle Ford crude in Asia, three traders said. Two very large crude carriers (VLCC), Awtad and Manifa, were booked to arrive in China and Singapore in February.