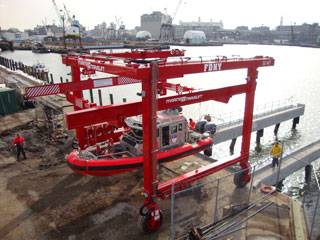 The New York City Fire Department (FDNY) is the largest fire department in the United States and protects 560 miles of waterfront through the use of a fireboat fleet by response to and mitigation of fires and other emergencies on the waterways, emergency towing, and firefighting; as well as providing life safety to those in the water such as swimmers and jet ski riders.
To increase its boat haul out abilities the FDNY Marine Operations opened up a competitive bidding process for a new mobile boat hoist. Marine Travelift won the new account with its 50 BFMII mobile boat hoist and delivered it in September of 2010.
The most common vessels the FDNY transports ranges from 25-ft open center console vessels to 27-ft full cabin crafts up to and including its new 65-ft fireboat that weighs approximately 88,000 pounds. The new 50 BFMII mobile boat hoist will be instrumental as the Marine Operations continues to expand with the addition of several 31 and 33-ft full cabin boats. To advance on-site aptitude, the Marine Operations pursued a new mobile boat hoist that offered the capability to perform lifts with slings and a special spreader with “pick points” for the vessels with foam collars, including its foam-stabilized SAFE Boat.
In choosing a boat hoist to fit their needs, Marine Travelift’s sling adjustments were important to Marine Operations in order to maximize the versatility and lifting potential for Marine Operations. With Marine Travelift’s hydraulic sling adjustments, the mobile boat hoist operator can change the spacing between the well-placed slings at the touch of a button. This function provides easy sling movement forward or aft to accommodate a vast variety of vessel hulls. No lubrication is required on sling adjusts; keeping the environment clean as well.
Marine Travelift engineers tailored the 50 BFMII mobile boat hoist with custom-built spreaders to allow foam collard vessels to be lifted by a single pick point and incorporated a special work and drive 12-volt LED lights system that runs off the crane’s electrical system; eliminating a need for separate power supply and providing illumination for boats being lifted out of the water at all times of the day and night. The 50-ton mobile boat hoist also features a sound suppression system that reduces engine noise and was painted to match the FDNY’s well-known bright red rescue boat colors.
Marine Travelift has been pioneering the boat handling industry for over 55 years by constantly designing bigger and better machines with an expanding set of standard features and options. Marine Travelift currently offers boat hoists that range from 15-ton all the way up to 1,000-ton capacity.