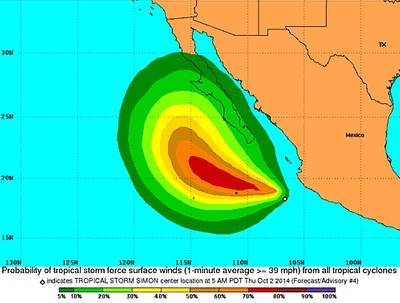 Tropical storm Simon formed early on Thursday off Mexico's Pacific coast, but it was projected to wheel out to sea in the coming days.

The U.S. National Hurricane Center said that as of Thursday morning, the storm was about 360 miles (580 km) south-southeast of the southern tip of the Baja California peninsula, which was slammed by Hurricane Odile last month.

Simon was moving to the west-northwest and could become a hurricane by Saturday, the Miami-based center said.

Odile plowed into the southern tip of Baja last month as a category 3 hurricane. It caused major damage to beach resorts, stranded thousands of tourists for days and sparked widespread looting, forcing the government to send in thousands of troops.