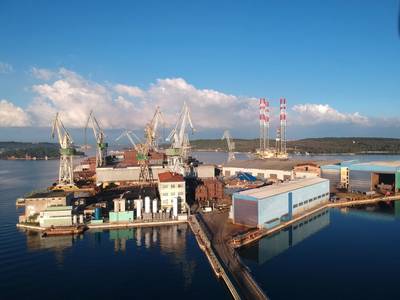 Croatia's troubled shipbuilder Uljanik said on Thursday it had chosen local rival Brodosplit as a strategic partner to restructure its operations.

Uljanik, 25 percent owned by the state and with 3,500 employees, has been working to stave off bankruptcy due to liquidity problems that began in 2017. Workers staged strikes twice last year over unpaid wages.

"Uljanik has chosen Brodosplit as its strategic partner which will have an obligation to devise, in cooperation with Uljanik, a feasible restructuring plan," Uljanik said in a statement filed to the Zagreb bourse.

"The chosen partner will be able to enter the ownership structure through a capital boost," said Uljanik, which owns two shipyards in the northern Adriatic cities of Pula and Rijeka.

Uljanik, whose shareholders also include local banks and insurer Croatia Osiguranje, did not give a value or other details of the strategic partnership. Brodosplit also declined to give details.

Economy Minister Darko Horvat said on N1 television news channel on Thursday that Italian shipbuilder Fincantieri was working with Brodosplit on the offer, without elaborating.

A source close to the matter told Reuters that Fincantieri would act as an adviser to Brodosplit at this stage but would not be an investor.

The economy minister has previously said restructuring Uljanik could cost about 800 million euros ($907 million), with at least half the amount expected to come from a strategic partner.

Croatia's once-prosperous shipbuilding industry has struggled since the collapse of Yugoslavia in the early 1990s. It has lost business to competitors, particularly in South Korea and other Asian nations.

Croatia has spent more than 30 billion kuna ($4.6 billion) in the past 25 years to save and then sell state-owned shipyards. Brodosplit was among those sold by the state.

The government paid out 2.5 billion kuna last year on state guarantees to help Uljanik stay afloat, driving the budget into deficit in 2018. Final budget figures for 2018 are due in April.

An association of tax payers, Lipa, said on Thursday the government was irresponsible in pouring money into a shipyard, when there was no certainty that it could recover.