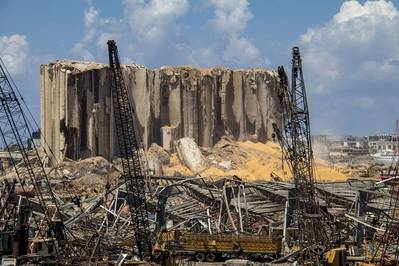 Pope Francis said on Wednesday he hoped the people of Lebanon can be comforted by justice over the Beirut port blast that killed at least 215 people two years ago, saying "the truth can never be hidden".

Speaking at his weekly general audience, Francis noted that Thursday would be the second anniversary of the blast, which also wounded thousands of people and damaged large swathes of the capital.

"My thoughts go to the families of the victims of that disastrous event and to the dear Lebanese people. I pray so that each one can be consoled by faith and comforted by justice and by truth, which can never be hidden," he said.

Despite the devastation wrought by the blast, one of the biggest non-nuclear explosions ever recorded, a judicial investigation has brought no senior official to account.

With the probe frozen for months, many Lebanese see this as an example of the impunity enjoyed by a ruling elite that has long avoided accountability for corruption and bad governance, including policies that led to financial collapse.

Francis said he hoped that Lebanon, helped by the international community, could see a "renaissance" and be a land of peace and pluralism where members of different religions can live together in fraternity.