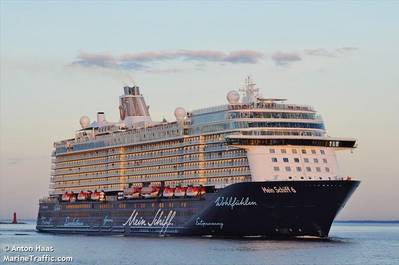 Twelve crew members of a cruise ship that docked at Piraeus port near Athens on Tuesday tested negative for the novel coronavirus in repeat checks by Greek health authorities, the ship's operator TUI Cruises said.

The Mein Shiff 6 cruise ship had departed from Heraklion in Crete on Sunday with all 922 passengers having tested negative before boarding.

But sample tests on 150 members out of the ship's total crew of 666, conducted at a land lab, detected 12 COVID-19 infections.

Sailing off the island of Milos, the cruise liner made its way back to Piraeus, the country's biggest port, with better access to health services and equipped to deal with any emergency. The affected crew on the ship was isolated.

A further PCR test carried out by Greek health authorities "should confirm this again", it said, calling the incident a possible false alarm.

The results of the PCR tests by Greek health authorities were expected later on Tuesday.

Those 24 crew members were also subjected to an antigen test by Greek authorities and all results were negative. Until the final results of the PCR tests are available, they will remain isolated, it added.

TUI said that given that no passengers were among the contact group, no tests on them were necessary and the vessel would resume its cruise once Greek authorities give the green light.

The cruise industry has taken a major hit from the pandemic, with some of the earliest large clusters of COVID-19 occurring aboard cruise ships.

Voyages of large cruise ships only resumed in recent weeks in Greece after they were banned for months.

TUI Cruises is a cruise line based in Germany.