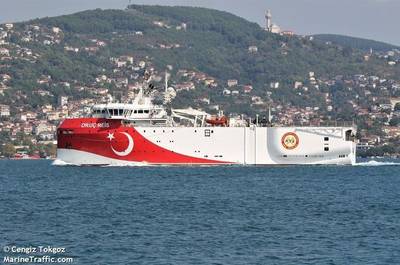 The eastern Mediterranean region where a Turkish ship will carry out a seismic survey is part of Turkey's continental shelf, Ankara said on Wednesday, rejecting Greece's accusation that the ship is encroaching on its own shelf.

Long-standing tensions between the NATO allies escalated after Turkey's navy on Tuesday issued an advisory known as a Navtex for seismic surveys in waters between Cyprus and Crete.

Athens and Ankara are at odds over overlapping claims for hydrocarbon resources, brought into sharper focus by attempts of EU member Cyprus to also explore for natural gas in the Eastern Mediterranean despite strong Turkish objections.

Greece and Cyprus, citing the UN Convention on the Law of the Sea, say that islands have their own continental shelves granting them extensive exploration rights. Turkey, with a long eastern Mediterranean coastline but few islands, contests this.

Turkish Foreign Ministry spokesman Hami Aksoy said the ship Oruc Reis will operate in an area where Ankara awarded licences to Turkish energy company TPAO in 2012, within continental shelf boundaries of which the United Nations has been notified.

Seismic surveys are part of preparatory work for potential hydrocarbons exploration. The Greek foreign ministry said the advisory covered part of the Greek continental shelf, a claim rejected by Aksoy.

"This maximalist continental shelf claim is contrary to international law, legal precedent and court decisions," Aksoy said, repeating a call to Greece for dialogue on the issue.

The Navtex advisory is in effect until Aug. 20.

Greece and Turkey have had strained relations for decades, with occasional flare-ups. There was a sharp exchange of words earlier this year when thousands of migrants Turkey hosts tried to force their way into Greece.

They also disagree over ethnically partitioned Cyprus, and Greece is angry over a Turkish-Libyan deal carving out maritime boundaries that skim the southern Greek island of Crete.

Turkey dispatched a vessel to conduct a seismic survey in a disputed area in the eastern Mediterranean, a move which Greece…