Turkish Drillship Returns to Turkey After Operating Off Cyprus 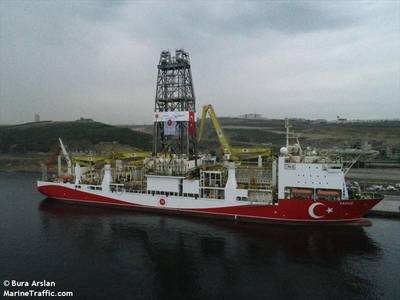 The Turkish drillship Yavuz has left the area where it was operating southwest of Cyprus and reached the Turkish coast, Refinitiv Eikon shipping data showed on Monday, in a move that may help ease tensions in the eastern Mediterranean.

Cyprus' internationally recognized Greek Cypriot government has long been at odds with Turkey, which began drilling for oil and gas near Cyprus last year.

The Yavuz vessel first began operations east of Cyprus in July 2019. Its latest operations to the southwest of the island, were most recently extended until Oct. 12 in a move which Greece described as provocative.

The ship tracking data showed Yavuz as being near the port of Tasucu in Turkey's Mersin province on Monday morning, having departed on Sunday from an area southwest of Cyprus.

On Friday, EU leaders assured Cyprus the bloc would punish Turkey if it continues drilling in disputed Mediterranean areas, after resisting Cypriot calls to impose sanctions on Ankara.

Regional tensions have simmered since Turkish and Greek frigates collided at sea in August near a Turkish exploration vessel, but cooled after Turkey and Greece agreed to resume "exploratory talks" that ended in 2016.

NATO announced on Thursday that the two countries, both alliance members, had set up a "military de-confliction mechanism" to avoid accidental clashes at sea.

Turkish seismic research vessel Barbaros Hayrettin Pasa remains off southeastern Cyprus and its operations there have been extended to Oct. 18.

The island of Cyprus was split after a 1974 Turkish invasion spurred by a brief coup engineered by the military then ruling Greece. Turkey does not recognize Cyprus' Greek government, and is the only country to recognize the breakaway Turkish Cypriot state in the north.