Over recent years the United Arab Emirates has emerged as an important maritime hub with grand ambitions. Mark Venables visited the region to discover what is driving that growth.

When the UAE was elected to the IMO Council as a Category B member, it immediately raised its profile within the maritime community. The Emirates have taken a significant step forward in the maritime world.

Despite this success, the region remains a challenging market for shipping and logistics. One of the drawbacks about attracting suppliers to set up base in the respective maritime clusters created around the area is that competition is fierce, a problem sharpened by the oil price collapse five years ago.

According to His Excellency Dr. Abdullah Belhaif Al Nuaimi, Minister of Infrastructure Development & Chairman at UAE Federal Transport Authority - Land and Maritime, the UAE continues its efforts to occupy the leading rankings in all fields and indicators of the international maritime transport industry. He believes that the first year of the UAE's membership in the IMO Council has been a success with the UAE ranked 14th globally in the prestigious 'Leading Maritime Nations in The World' report released late last year.

"The presence of many small, high-income economies among the top ten countries in the field of maritime transport indicates the critical importance of the success of measures and policies of the maritime institutions," Al Nuaimi says. "This includes regulating, controlling and managing the maritime assets efficiently, including investment optimization, which indicates a high value based on increasing research, development, innovation and higher education in maritime transport. 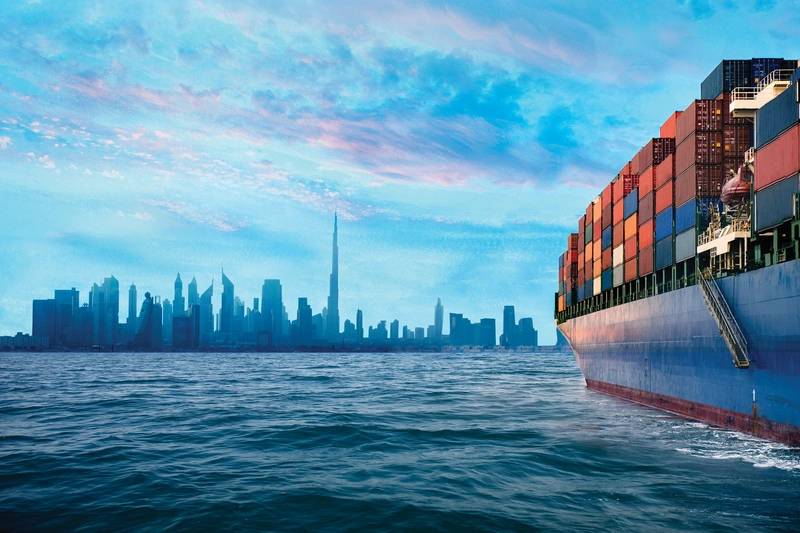 Image Credit: Dubai Maritime City Association.Nurturing the Dubai vision
Despite the aspirations of Abu Dhabi, the jewel in the crown of crown for the UAE remains Dubai. According to the 2019 edition of The Leading Maritime Capitals of The World 2019 report from Menon Economics and DNV GL Publication in the Middle East, India and Africa region, Dubai is the leading maritime center and at a global level, now ranked ninth. The experts predict that Dubai will continue to grow in importance and could be in the top five of the world's most important maritime centers by 2024, albeit with intense competition by the European cities as well as Hong Kong.
According to the Dubai Maritime City Association (DMCA), Dubai currently hosts more than 5,500 maritime companies and 13,000 maritime activities, which in turn support more than 76,000 jobs. The sector contributes almost seven per cent of the Emirates' gross domestic product, equivalent to $7.3bn, which the government hopes to significantly increase this proportion by 2030.

The tail end of 2018 was a significant time for Dubai with the Dubai Maritime Cluster Office (DMCO), part of the DMCA, signing strategic partnerships with the world's leading maritime clusters. These included Germany's Maritimes Cluster Norddeutschland, Canada's Vancouver International Maritime Cluster and the Maritime Cluster of the Panama Maritime Authority.
"The co-operation with a leading international authority in the maritime sector such as Panama reflects the trust and confidence placed by the global maritime industry in Dubai. We are one of the five most competitive and attractive maritime hubs in the world, supported by advanced capabilities in the infrastructure and maritime culture that stimulate innovative research and development," Nawfal Al Journai, director of DMCO, says.

However, according to Al Journai, one of the most significant signs that the UAE plays a growing role in the world maritime community is the establishment of UAE Maritime Week as a significant annual event. "UAE Maritime Week is an important milestone for the sector," he adds. "Other major maritime centers such as Oslo, Greece, and Hamburg hold global Maritime events. In the Middle East, there was nothing until we came up with the UAE Maritime Week."

Leading port in the Emirates
DP World currently has five terminals in Dubai, three at the flagship Jebel Ali Port and one each at Mina Rashid and Mina Al Hamriya, but that will change when the fourth terminal at Jebel Ali comes online later this year. The high-tech terminal was initially slated to open at the turn of the year but has been delayed because of weaker than expected market conditions. 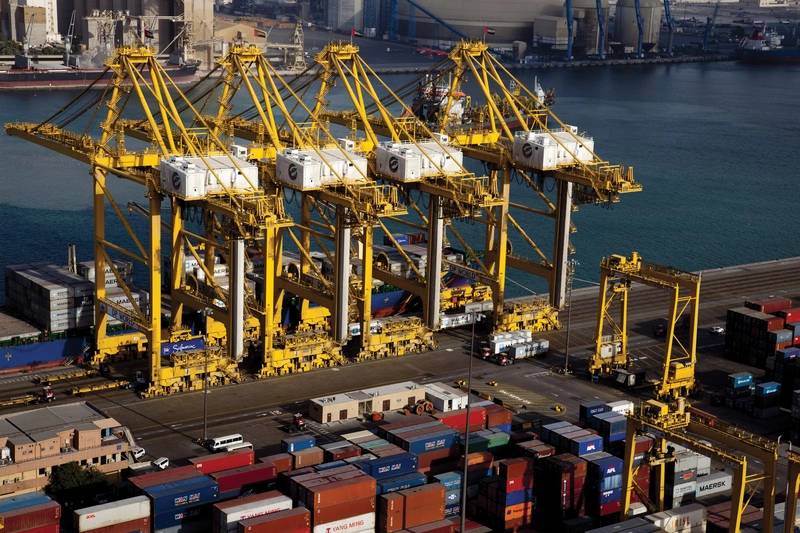 DP World currently has five terminals in Dubai, three at the flagship Jebel Ali Port. Photo Credit: DP WorldJebel Ali is already the tenth largest container port globally, handling more than 15 million TEU annually. The original plan was that the opening of Terminal 1 would lead to increased capacity, but now DP World will take the opportunity to refurbish Terminal 1.When it does open, it will feature an innovative High Bay Storage (HBS) system. The design and rack structure of the system allows containers to be stored up to eleven stories high, delivering the capacity of a conventional terminal in a third of the surface area. It is also fully automated eliminating the need for reshuffling.

It has been a busy six months for Abu Dhabi ports with a significant partnership along with several sectors increasing their presence. The main highlight came late last year when Cosco Shipping Ports (CSP) inaugurated the CSP Abu Dhabi Terminal at Khalifa Port; positioning Abu Dhabi as the regional hub for Cosco's global network of 36 ports and further connecting the Emirate to the major trade hubs along China's Belt and Road Initiative (BRI).

The deepwater, semi-automated container terminal includes the largest Container Freight Station (CFS) in the Middle East, covering 275,000 square meters. The state-of-the-art facility offers options for full and partial bonded container shipments, the full range of container packing services, short-term warehousing for de-consolidated cargo as well as easy connectivity with container terminals in Khalifa Port.
KIZAD, the industrial zone subsidiary of Abu Dhabi Ports, launched a Polymers Park which will form an integral part of the polymer conversion ecosystem in the Emirate. This is part of a strategic collaboration framework with Abu Dhabi National Oil Company (ADNOC), which aims to accelerate investment and innovation in the region's plastics industry. The collaboration aims to offer companies fast and cost-effective access to polymers as well as the option to invest in the Ruwais Conversion Park – an initiative that will take shape over the next few years.

When it comes to transportation links, the rail infrastructure has always been a limiting factor, but that could be changing with the news that Etihad Rail and Abu Dhabi Ports have signed an agreement to connect Khalifa Port with the National Railway Network. The deal reflects the mutual efforts of Etihad Rail and Abu Dhabi Ports to support the growth and diversification of the UAE economy by strengthening the transport infrastructure and connecting vital facilities such as ports to the rail network to facilitate the transport of containers and various types of goods in a safe, efficient environment-friendly way. 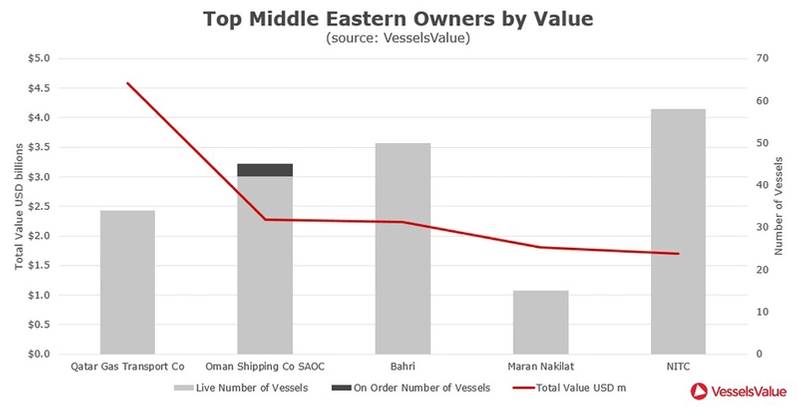 Source: VesselsValueOffering a third choice
Although Dubai and Abu Dhabi lead the way in the maritime sector in the UAE, they are not alone. Fujairah Port is the only multi-purpose port on the Eastern seaboard of the United Arab Emirates, approximately 70 nautical miles from the Straits of Hormuz and is home to two oil terminals. However, it is the Ras Al Khaimah Port (RAK Ports) and its free zone that has bold ambitions to grow as an alternative to Jebel Ali and Khalifa Ports.

RAK Ports consists of five ports within a 65km coastline. Al Jeer Port to the North, just on the Oman border, RAK Maritime City, which is a free zone, Ras Al Khaimah Port in the city center port, Saqr and Al Jazeera Port. "Each one of the ports contributes in its own way and we have just undergone a strategic exercise to identify more specifically what these ports do and should do," Captain Cliff Brand, RAK Ports CEO says. "As a result, at least two of these ports will be repurposed in the future to accommodate the strategy."

The first significant challenge that RAK Ports face is replacing the trade lost from the Qatar embargo that was imposed two years ago. "It took us almost a year to regain volumes we lost," Brand explains.

Part of this strategy was signing a 25-year agreement with Hutchinson Ports to develop and manage the container terminal facility at Saqr Port. The port comprises a four-berth, 350,000 TEU facility featuring an 800m quay with a depth of 12m. As for the development, the first of two new deepwater berths capable of handling capsize vessels have been completed along with investment in the latest bulk-handling equipment including high capacity mobile harbor cranes. The project will make Saqr Port one of the largest bulk handing ports in the world.

"This time last year we were doing about 220 TEUs a month, which was, of course, was a big jump for us considering we were starting from zero, but there's been a strong upward trend," Aryavansh Shukla, logistics solutions manager at Hutchinson Ports explains. The figures have been impressive – growing to 4000 TEUs in December, and by the end of the first quarter this year the monthly statistics were almost 6000 TEUs.
"What this leads us to believe is that now the market is more switched on to the advantages that we're offering; they're more aware of the cost savings. It is not only diverting volumes from other ports but also organic business growth. Many times we've had companies reach out to us to understand the model because they're investing in Ras al Khaimah, so they want to start off using the port from day one of operations. We see the trend continuing in the future as well." 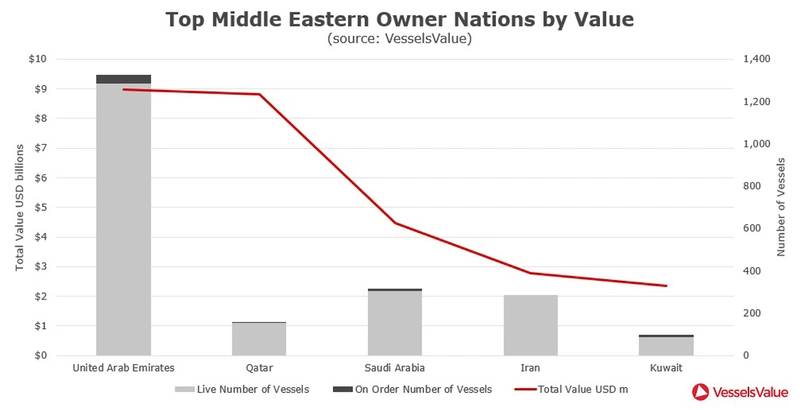