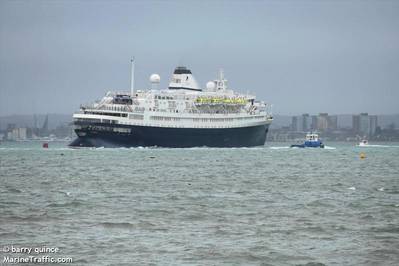 Several cruise ships idled without passengers due to the coronavirus pandemic are being inspected in British ports in response to crew welfare concerns.

Surveyors acting for the U.K. Maritime and Coastguard Agency (MCA) have detained the Portuguese-flagged Astoria, which is currently at Tilbury Docks, the agency said Friday, adding that the detention is a preventative measure in line with U.K. regulations, to ensure a full inspection of the ship related to the Maritime Labor Convention can be carried out before its intended departure. The ship cannot leave the port until the inspection is completed.

Five other ships operated by the same Athens-based company, Global Cruise Lines, including four others at Tilbury and one at Bristol, are also being inspected.

Acting as the Port State Control Authority for the U.K., the MCA has taken this action following a number of serious concerns which were raised about the welfare of the crew.

Katy Ware, Director of Maritime Safety and Standards and the UK's permanent representative to the International Maritime Organization (IMO), said, "We will always take reports around crew welfare seriously and we have used our powers as the Port State Control authority to carry out this detention so that we can investigate more fully."

Vow ASA subsidiary Scanship said it has been awarded a 7.8 million-euro contract ($8.8 million) for its cruise clean ship…